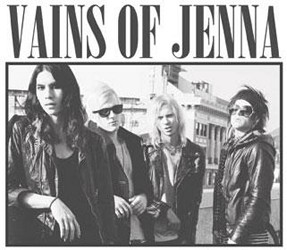 Vains Of Jenna Call It Quits After Seven Years

Vains Of Jenna, the Swedish sleaze outfit that caught the attention of Tuff’s Stevie Rachelle and Jackass star Bam Margera, have decided to end the band after seven years. The announcement of the band’s demise was expected after former Dokken guitarist George Lynch recruited Vains Of Jenna vocalist Jesse Forte for his Lynch Mob project earlier this week.

“After 7 years, we have amicably and mutually decided to end Vains Of Jenna,” said Jesse Forte, Nicki Kin, J.P White and Jacki Stone on their Facebook page. “There’s no drama behind the decision. We simply feel like it is time to move on in our lives and close this chapter. It has been a truly amazing journey for us over the years and we aregreatful for the opportunity to do what we’ve done with this band. A huge thanks to everyone involved, all of our supporters, and of course all of our fans from around the world. We love you.”

Vains Of Jenna was formed by Lizzt DeVine (vocals), Nicki Kin (guitar), JP White (bass) and Jacki Stone (drums) in the small town of Falkenberg, Sweden in January 2005. After posting their debut demo on the internet, they landed an offer to play the world-famous Whisky-A-Go-Go in Hollywood in July 2005. They stunned the crowd with their raw energy, young bravado, and sleazy throwback appeal. At the time half the members were a month removed from high school, and four days later they were cutting a demo with Gilby Clarke (ex-Guns N’ Roses) at Redrum Studios and being managed by Tuff frontman Stevie Rachelle.

The band was back in Hollywood in the summer of 2006 and attracted the attention of Bam Margera (MTV’s Viva La Bam/Jackass) who signed the band on the spot. Their debut full length was titled ‘Lit Up/Let Down’ and hit stores on Filthy Note Records in October 2006. A half dozen US tours followed; most notably a 55 date amphitheatre tour supporting Poison and Ratt — others included the ‘Viva La Bands – II’ theatre tour with GWAR and Cradle of Filth and a US club run with Wednesday 13.

Over the next 24 months the band turned more industry heads at the Sunset Strip Music Festival in Los Angeles, SxSW in Austin Texas, Hempfest in Seattle and the annual Sweden Rock Festival in Sweden. All the while Vains Of Jenna was sharing the stage with anyone who rocks: The Donnas, Michael Monroe (Hanoi Rocks), Chelsea Girls, Bullets N’ Octane, Dizzy Reed (Guns N’ Roses), The Last Vegas, Viking Skull, Crashdiet, L.A. Guns and the Sunset Strip legends Steel Panther. In a few years time, the band had performed over 300 live shows globally.

Vains Of Jenna spent 2008 writing and recording but made TV appearances on Jackass 24 (MTV) and LA INK (Kat Von D), with the track “Enemy In Me” being featured on both. In the fall of 2009 they released ‘The Art of Telling Lies’, produced by Wildside’s Brent Woods, to rave 5 star reviews and a Top 10 placing on the Sleaze Roxx Reader’s Choice Awards.

In March 2010 the band evolved with a shocking yet welcome change. The band introduced Jesse Forte as their new lead singer and frontman after Lizzy DeVine departed by saying, ” I must move on and let the band grow.” The group wasted no time and flew to Europe in April 2010 to embark on a 40 date European tour. Fans were elated at the bands vigor as they played in Germany, France, Switzerland, Norway and Czech Republic for the first time. They also returned to familiar places like Denmark, toured the UK and Sweden and added a second guitarist in Anton Sevholt. While in Europe they shot a video for their remixed single “Everybody Loves You When You’re Dead”.

The band did not hesitate to record either. The original musical core of the group — Nicki Kin, JP White and Jacki Stone — took their new voice and hit the studio in July 2010. The outcome was the EP ‘We Can Never Die’. With no time to rest, the band toured South America for the first time in the fall of 2010 and returned to the US once again to record. In April 2011 the band released ‘Reverse Tripped’ on Deadline/E1 Records, a 14 song covers album that included the hit single “F**k You”, the song made famous by Cee Lo Green. A US tour to support the new CD kicked off on April 30th 2011.