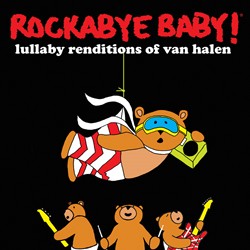 Kids have an unchained energy; they erupt and jump — or run like little devils. There’s no better soundtrack tothis than the unbridled, fist-pumping music of Van Halen. But when the playdate’s over and it’s time for your diminutiveDiamond Daves to settle down, Van Halen’s thunderous rhythms and wailing guitars are not the soothing sounds to sway your littleone to sleep. Leave it to Rockabye Baby to find a way to turn these songs into lullabies with ‘Rockabye Baby! LullabyRenditions of Van Halen’ and Sleaze Roxx gives you a sneak peek at “Panama” below.

With vast appeal that spans indie rockers to mainstream audiences, Van Halen is a no-brainer for Rockabye Baby’s lullabytreatment because everybody wants some. However, their exuberant, iconic songs quicken pulses; so how do they translatethem into a soft soundscape? Enter Rockabye Baby’s enchanting vibraphone and glockenspiel tones which tame theboisterousness of “Panama,” and transform “Eruption,” Eddie Van Halen’s legendarily volcanic guitar solo, withoutsacrificing their original exhilarating energy. Parents will have the urge to give way to adoring applause as their bundle of joyfalls fast asleep.

‘Rockabye Baby! Lullaby Renditions of Van Halen’ is a fitting release for a series that has charmed parents and children alikesince 2006. Rockabye Baby’s unrivaled ability to cleverly render classic rock n’ roll into beautiful instrumental lullabies haschanged the kids’ music paradigm, giving parents an alternative way to mellow their children. This unprecedentedcombination of entertainment and practical parenting has led to copious praise from print and television media, as well asindustry awards.

“Searing lyrics screamed by Metallica seem an unlikely recipe for soothing a child to sleep,” wrote the Chicago Sun-Times,but “reconfigured with a vibraphone, glockenspiel, and mellotron the hard-rock hit ‘Enter Sandman’ is now part of a brisklyselling children’s CD in the pint-sized incarnation of the rock ‘n’ roll revolution.”