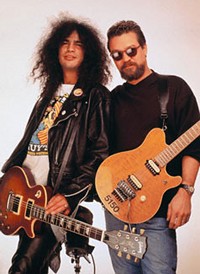 According to the Van Halen News Desk, on May 17, Tom Russell of U.K.’s Rock Radio conducted an interview with legendary guitarist Slash (Velvet Revolver, Guns n’ Roses). Reports suggest that Van Halen, with David Lee Roth on the microphone, are working on a studio album with Grammy Award winning producer John Shanks and intend to release it later this year. Here’s what Slash had to say about what Van Halen is up to:

Slash: “I’m a huge Van Halen fan. They’re finishing [up their new album right now], actually. I don’t wanna speak on their behalf, but one of the guys that works for us works for Van Halen in the studio and he told me that they’re in the mixing stages.”

Here are some more comments the Van Halen News Desk has gathered from over the years that Slash has made regarding Van Halen:

“And when Van Halen came out, it was such a mind-blowing thing–and everybody decided to go there. Within hours of Van Halen first playing at the Starwood, there were 50 guys trying to do that whole ‘Eddie Van Halen guitar playing’ thing, copping his whole trip. When I saw Van Halen, I was like, ‘Wow! That’s brilliant!'” (Guitar One magazine, Apr. 2000)

“In junior high school [original Guns n’ Roses drummer] Steven Adler and I would race our bikes and cut through the school fence so we could hang out, smoke pot and do chicks. One day he played ‘Eruption/You Really Got Me’ for me, and I couldn’t believe the intensity of it. We listened to that first Van Halen album constantly. But I never picked up on that whole whammy-bar, tapping school of playing. But the last time I saw Eddie [Van Halen], he really gave me some nice compliments on my solo in ‘Paradise City.’ Suddenly I realized that even though I never tried to imitate him, I do have a knack for going for the same kind of fast, fluid passages he does–which I obviously picked up from listening to Van Halen records.” (Guitar World magazine, Nov. 2000)

“Eddie Van Halen was and is the pinnacle of Van Halen. His guitar playing transcends the boundaries of rock ‘n’ roll guitar, bending all the rules of traditional techniques. His style quickly revolutionized the genre and influenced the next generation of guitar players worldwide. Not since Jimi Hendrix has there been such an impact on the way rock ‘n’ roll guitar is played. Eddie is one of the greatest guitar players to ever come along. There’s not much more to say.” (Van Halen: A Visual History, 1978-1984 by Neil Zlozower)

Yet later, Slash did indeed have more to say he wrote the foreward to the upcoming Eddie Van Halen photo book by Neil Zlozower, due in October 2011.