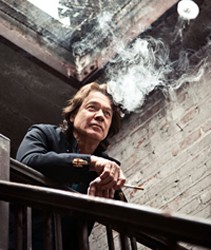 Eddie Van Halen recently sat down with Esquire Magazine for a lengthy interview and revealed that Van Halen’s successful new album ‘A Different Kind Of Truth’ was the first he ever recorded sober.

“The funny thing is, about the whole alcoholism thing: It wasn’t really the partying. It was like — I don’t mean to blame my dad, but when I started playing in front of people, I’d get so damn nervous,” says the legendary guitarist. “I asked him, “Dad, how do you do it?” That’s when he handed me the cigarette and the drink. And I go, Oh, this is good! It works! For so long, it really did work. And I certainly didn’t do it to party. I would do blow and I would drink, and then I would go to my room and write music.”

“You know, people say with that twelve-step program you will succeed. I disagree,” continues Eddie. “When they say, “You can’t say, I will never drink again,” I can honestly say I will never drink again. It’s a whole new world. I’m fifty-seven years old and I know I’m not going to live to be 114, so I can’t say I’m halfway done. It’s a sullen truth, but this is the first record I’ve made sober. There’s a certain place that you have to get to where things just flow, and I have to say that when I drank and did blow, it might have created a false sense of getting there easier. I’m not comparing myself to all these famous artists in history, but you know, everybody, guys like Mozart, they were all alcoholics. And it does somehow enable you to lower your inhibitions. At the same time, it also gives you a false sense that what you’re doing is great. Now I’m so aware of everything that sometimes I’m afraid to pick up my guitar.”