“FINALLY, amigos!! As you may have noticed I’ve been biting the tip of my tongue for quite some time now to keep my big mouth shut about this exciting news: VANDENBERG 2.0 ON STEROIDS with the one and only amazing vocalist and dear friend the mighty Ronnie Romero! Don’t settle for less!!

To be honest, I’ve rarely been this excited in my musical adventures this far (just getting started of course..) and I can’t wait for our album to get launched into the world?☠️??? 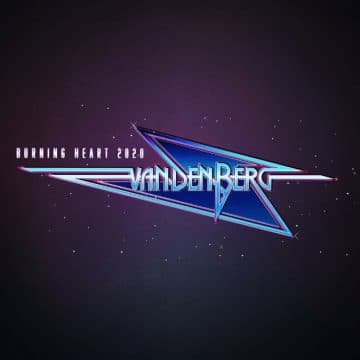 As a ‘teaser’ we have this re-recorded version of the Vandenberg classic Burning Heart, since our brand-spanking-blistering redhot album isn’t finished yet. So at least you’ll have a first taste of our rockin’ ensemble doing a chanson d’amour?

Please keep an eye on our ‘vandenbergband’ pages on all the socials to stay up to date about our endeavours, because I guarantee you that you’ll be a bunch of happy fuckers. Provided that you’re not against loud, bold, heavy, hard rockin’ chansons with soaring vocals, scorching geetars, booming bass and thundering drums. And its roots in all the quality rock since the late 70’s up to now that has made us smile, grin, excited, raise our fists, bang our heads, annoy our neighbours, kick our feet and make babies to. Do I sound excited? Probably, because I am and just like you guys I’m still a huge fan of this shit!! BANZAI!! ☠️???”

Vandenberg is back! Or should we say: Vandenberg are back?Adrian Vandenberg (Guitars), Ronnie Romero (Vocals), Brian Tichy (Drums) and Rudy Sarzo (Bass) have…