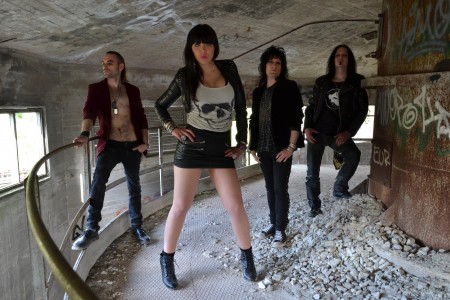 Swedish rockers Vanity Blvd have released a video for their song “Had Enough” from their 2014 album Wicked Temptation, which was recently re-released as a “Dirty Edition” with two bonus tracks.

Sleaze Roxx stated the following in its review of Wicked Temptation back in February 2014: “Flirting casually between Eurovision pop and glittering glam rock, Wicked Temptation is damn catchy stuff — and although a couple of tracks aren’t up to scratch, for the most part they destroy everything they aim at. Guitarist Traci Trexx is the driving force behind opener “Dirty Rat”, his Jimi Hendrix tinged riffs are a lesson in themselves of how to rock it like a pro. In true anthemic fashion, proceeding single “Do Or Die” takes the amps up to 11 and chugs along at an unstoppable pace. It’s well crafted with classic, heavy solos and catchy commercial hooks that could best represent Sweden at the Eurovision. Elsewhere, unleashing her inner seductive temptress, Miss Savage recalls the likes of Lita Ford at her best on “Hot Teaser” and croons, “Tastes so good, feels so wrong, what the hell have you done? I’m mad about hot teaser.””