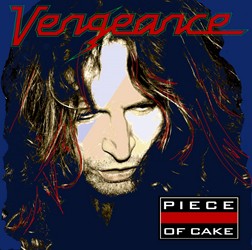 Vengeance Set To Release ‘Piece Of Cake’ In November

Brimming with confidence and justifiable pride, Dutch rockers Vengeance have announced the upcoming release of their latest album ‘Piece Of Cake’ via Steamhammer/SPV.

“People can expect what to my ears is the best Vengeance album to date,” declares guitarist Timo Somers. “The songs are a nice blend of old school Vengeance (think Arabia) and some more modern sounding songs. This time the instrumental side of the band is really outspoken, it features a lot of nice intros, solos and instrumental pieces. And to top it off, Leon (Goewie, vocals) sounds better than ever.”

Somers promises eleven gripping new compositions. “Raintime is the fastest song on the album. The song kind of sounds like a Malmsteen song with Leon on vocals. Double bass, big chorus and a fast guitar solo are the keywords.” The most typical song is the title track “Piece Of Cake” — Somers said “We needed a party song for the album and we wrote this together in about an hour in the studio. It`s this typical AC/DC thing with Leon going nuts and some Van Halen like guitars.” The most unusual song is “Back To Square One”, a blues rock ballad in the vein of Gary Moore. “I don’t think a lot of people know this side of Vengeance,” Somers suggests, “but it showcases our more soulful side.”

‘Piece Of Cake’ will be released on October 28th (October 25th in Germany and November 5th in USA/Canada), before Vengeance embark on their European tour with labelmates Mad Max. “This is a double tour together with Mad Max to celebrate our new albums being released on the same day. I’m pretty sure we’ll be on tour in spring 2014 as well — we’re working on that at the moment.”