Eighteen days after releasing their debut video for their song “Shreds Of Glass”, Portuguese rockers Venïce Cathouse have released a second song called “Paralyzed Together” which is available for streaming. 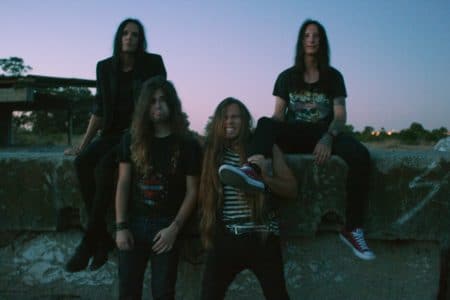 “The band started when the guitarist Mário França met the singer Jim Gäddnäs. Jim moved to Lisbon to audition for the singer position in a common friend’s band in 2014. Christian Dahl, the drummer came to Portugal after travelling around Europe, as he was friends with Jim, he moved to his home in Lisbon.

After some jams in the summer of 2015, the trio decided to go on studio to rehearse. Soon, Jim said that he wanted to focus on the vocals, and the search for a bass player began. Mário met the bass player Jonathan Boggard when he came to Portugal in 2014 and sent him the invitation to join the band in January 2016.

With the band formed, they recorded two songs with the Swedish producer, Juan Casado, ‘Shreds of Glass’ and ‘Paralyzed Together’.

The single ‘Shreds of Glass’ was released on the 6th of December 2016.”