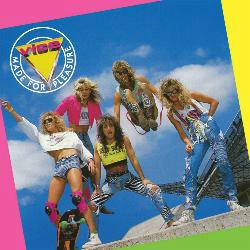 Vice Set To Reissue ‘Made For Pleasure’

Yesterrock Records are set to reissue Vice’s debut album ‘Made For Pleasure’ on July 23rd. The reissue, complete with two bonus tracks, will be available for purchase at www.yesterrock.com.

Back in 1988 VICE signed their first major deal with BMG-ARIOLA in Germany. They recorded the first album in Hanover and called it ‘Made for Pleasure’. All started up quite good. The promotion and the collaboration with BMG was excellent, they entered the charts and played many shows all over Europe. Among others Vice supported BONFIRE on their first European tour. Chris Limburg, the main guy in Vice, produced two albums for the German Southern rockers. 10 years later he signed as a solid member in a band called… BONFIRE.

But back to the 90’s VICE also played several TV shows, festivals, got a huge presence in magazines and radio, they got bigger and more famous by every week. But then the biggest shock you ever can imagine happened to the band….The singer Jan Ghiantinie died within only two month by a sickness called Rheumatic Child Disease. It was really hard to carry on with VICE. Two years later the band found a new singer, Alan Keen, half American with an amazing rock voice. We began with the song writing for a new album and called it ‘Second Excess’. In the middle of the 90’s, VICE released a 3rd album under a new name – VICE became WET PAINT and the album was called ‘Shhh…’.

Chris Limburg today says: ‘I am happy and a little proud, that YESTERROCK and Sony were interested to re-release the first album of VICE: ‘Made For Pleasure’ for a new (old) upcoming rock period in 2010. The two unreleased bonus tracks were recorded by VICE in Autumn 1990 when the band was getting a little harder and rougher’.