It is no secret that Vicky Hamilton managed and helped Guns N’ Roses get signed by Geffen Records back in the group’s early days. Hamilton has released an uncensored tell-all book entitled Appetite For Dysfunction: A Cautionary Tale about her life including her time managing the infamous classic line-up of Guns N’ Roses during the early days of the band. 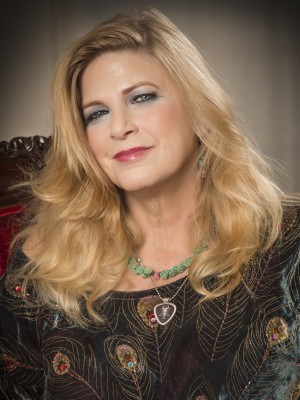 …Even in the early days, Vicky said she saw the makings of the ‘monster’ Axl would become.

The worst incident Hamilton witnessed was when an enraged Axl set on drummer Steven, hurling a heavy wooden coffee table at him in a seemingly unprovoked attack.

She said: ‘The band were a little intimidated by Axl and there were fights.

‘One time Axl was sleeping on the couch and Steven Adler was trying to help me clean up all the bottles from the previous night’s parties.

‘It woke Axl up which annoyed him and he was like “Stop it, stop it”.

‘Then he gets up, lifts the coffee table and heaves it at Steven Adler they get into a fight.

‘I was like, “seriously you’re gonna kill your drummer on the day before the showcase how does that make any sense? Stop!”

‘Steven has since told this story and said it was a glass coffee table – but I still have the coffee table it was definitely wood.

‘But there was stuff like that all the time. I saw Axl be violent a lot.

‘He has two very distinct personalities – one is a very sweet boy the other is demon dog from hell and you can tell where he’s at by looking at his eyes.

‘If I saw that bright green color in his eyes I would think “Right I’m staying clear of this.”

Axl would disappear when he was in his ‘demon’ phases, said Vicky.

‘Luckily I didn’t have to deal with it very often in my apartment – apart from the time he tried to kill Steven Adler,’ she said.

‘He had a major temper he could go from one to 60 in a second that was alarming for me you never knew when he was gonna explode.

‘He hadn’t been diagnosed with anything but it was clear there was something wrong nobody wanted to set him off everybody was a little scared or at least intimidated by him. If he was already off you just had to get out of the way. 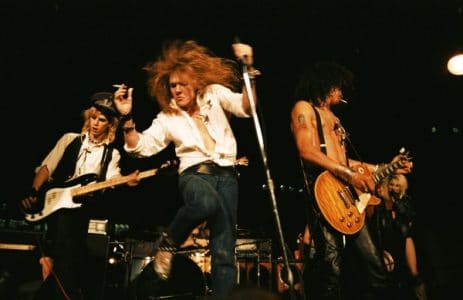 ‘It would happen at shows he’d get mad with someone in the audience then stage dive off and beat their ass.

‘If someone heckled or threw something but you never knew what was gonna set him off it could be something very small.
‘He was doing this from the very beginning his personality never changed,

‘I heard he locked Erin Everly in a closet and lit it on fire but I wasn’t there I never witnessed him being violent towards women. That was way after.

‘Once he broke the mirror in the Roxy bathroom over something some girl had done to him.

‘He had a short fuse and I was the clean-up person. I definitely saw the makings of the monster Axl became. I told everyone at Geffen that he was crazy.’

Vicky, who said she fell in love with the band’s sound as soon as Axl insisted on coming to her office and playing her some tracks on his ghetto blaster, worked tirelessly in the early days to promote the band and land them a sought-after record deal.

She remembers it was always a challenge to keep tabs on the band and ensure they turned up on time for performances – particularly Axl who would later become notorious for coming on stage hours late – enraging fans and costing the band thousands in fines and insurance fees.

She said: ‘I was like the mommy trying to keep tabs on them all getting them to the gigs on time.

‘He got a lot later, later on and it cost them a lot of money because of insurances at big gigs but from day one it was a problem for Axl.

‘He was a diva. He wasn’t – at that point anyway – outrageous with rider demands in the no brown M and Ms kind of way but I think he had a lot of nervous energy. He suffered from stage fright. There is something that goes off in his mind that he has to be completely ready to perform or he just doesn’t.

‘They went on late a lot. Eventually he’d show up and play but he was late a lot.

‘Usually they were the headliners so the kids would wait for them to go on and it wasn’t the hours and hours that he was going on late in the later years it was more like a half hour or whatever, but it was still frustrating.

‘I mean if you can’t find somebody its very nerve wracking you know especially when you have the owners of the club looking for you and asking “Where the f*** is he?” and you have to lie and say “Oh he’ll be here any minute” and you don’t really know if he’ll be there or not. 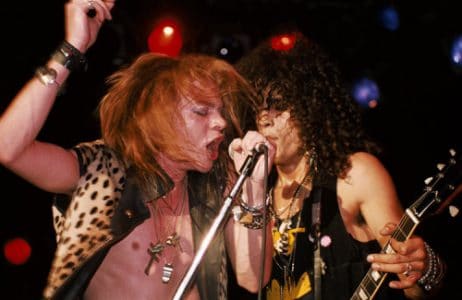 ‘Sometimes later he didn’t even show up but he always showed up with me.’

She remembers one time when Axl‘s mood swings and lateness almost cost them their record deal with Geffen, the label who signed Guns N’ Roses.

Vicky had organized a meeting to sign the long-awaited contract with several record executives at Geffen in March 1986.

But on the day Axl lost his contact lenses and refused to go.

He flew into a rage thinking someone had stolen his contact lenses, refused to go to the meeting and stormed out of the house telling the others to ‘go without him’.

Vicky recalled: ‘All I wanted to do was get down there and sign the contract and the clock in my mind was going tick tock and it’s getting later and later. I’m just thinking “Don’t blow it, let’s get the money”.

‘In my mind I was thinking: “Please God just let me get my apartment back to myself.”

‘What was going through Axl‘s head was “Who took my contact lenses so I can’t read the contract?”

‘Then we eventually found him sitting on top of the Whisky A Go Go, in an easy pose looking over the city where he would become the new reigning king.’

Axl had climbed up to the roof via a fire escape.

Eventually he was persuaded to come down after Slash told him his contacts had been found – in his pants.

‘So then he rolled down and we went down there and signed the contract. I think we were about four hours late. Luckily they had all waited – except David Geffen but the others had.

‘Nobody was angry it was kind of the status quo – every day it was something like that.’

…Vicky also recalls a time when she saved the band from potentially losing millions of dollars in revenue when she walked in on Axl thrashing out a deal to sell record producer Kim Fowley three of what would become the band’s biggest hits from Appetite for Destruction for a mere $2,500.

She told him: ‘Dude you cannot do that, we’re in the middle of a bidding war with lots of record labels here you cannot sell out these songs.’

‘It was Welcome to the Jungle and two of the others that ended up on Appetite.

‘He just said, “We really need the money”. He was ready to say OK and I was like: “Are you crazy you cannot do that.”

Vicky left the pair and went to do some laundry and Fowley followed her screaming at her, ‘You messed up my deal! I deserve a piece of that!’

She added, ‘Fowley always denied this happened but it did.

‘I saved the band millions and millions of dollars that they would have lost if I let him sell them.

‘Axl never said thank you – I’m still waiting for that.

‘For an artist publishing is your retirement fund, hungry record label people that’s what they want – your jewels, your publishing money and Axl nearly gave it away.’

You can read the complete article / interview at the Daily Mail. Thank you to Your Backstage Pass for flagging the Daily Mail article.