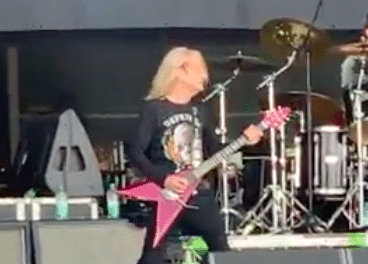 K.K. Downing performed live for the first time in a very long time as the former Judas Priest guitarist joined Ross The Boss at the Bloodstock Open Air Festival in Catton Park in Derbyshire, UK on August 11, 2019.

The Judas Priest songs played by Ross The Boss with Downing in the line-up were (as reported by The Metal Voice): 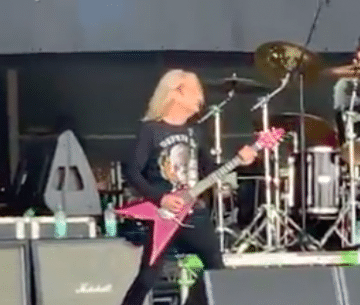 In an interview last month with The Metal Voice, Ross The Boss was asked about how many songs would be performed with K.K. Downing at Bloodstock to which the former advised: “We don’t have a ton of time. We got like an hour plus so we will play three or four Judas Priest songs with K.K.. We just want K.K. to come out and get some love from the audience. He deserves it. He’s a father of heavy metal. I know he’s a bit nervous but that’s to be expected but we will do everything for him to make him feel as comfortable as possible and let him play his guitar, let him do what he does. At the end of the day, I hope that this gives them the motivation to get him back into Judas Priest. Glenn [Tipton] is not there now and I think that K.K.belongs there now, if they could mend the fences. We’re not spring chickens anymore. Life is too short at this point and I think that before someone goes or something tragic happens, I would love to see K.K. back in Judas Priest. I would love to put some good vibes out there to him and so maybe there would be a chance that something could happen and I think the fans would love it.”

Video footage of K.K. Downing performing at Bloodstock Festival with Ross The Boss on August 11, 2019:

K.K. Downing and Ross the Boss – Breaking the Law live at Bloodstock metal festival 2019An extra special set with a guest appearance from legendary ex-Judas …