Atlanta, Georgia, USA rockers Kickin Valentina consisting of lead vocalist D.K. Revelle, guitarist Heber Pampillon, bassist Chris Taylor and drummer Jimmy Berdine played a couple of shows this weekend to celebrate the release of their new studio album The Revenge of Rock, which came out via Mighty Music / Target Group on January 22, 2021. The group played Bowie’s in Nashville, Tennessee, USA on January 22, 2021 and the Dixie Tavern in Atlanta, Georgia, USA the next night. 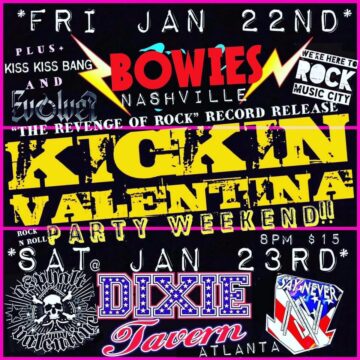 Kickin Valentina‘s setlist on both nights was understandably heavy on their new album with five or six tracks played from The Revenge of Rock (2021), three from the Chaos In Copenhagen EP (2019), two from Imaginary Creatures (2017), one from Super Atomic EP (2015) and one from the Kickin Valentina EP (2014).

Kickin Valentina performing “Turns Me On” live at Bowie’s in Nashville, Tennessee, USA on January 22, 2021: