History was made with the first Steeler show in 35 years, which took place at the Alrosa Villa in Columbus, Ohio, USA on 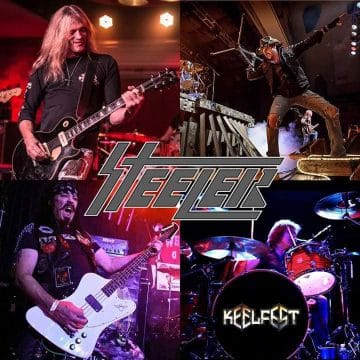 Friday, May 10, 2019. The reunited Steeler line-up consisted of Steeler alumni Ron Keel (lead vocals), Rik Fox (bass) and Mitch Perry (guitar) along with Keel drummer Dwain Miller. Of note, Miller did audition for Steeler back in 1983 when he was 18 years old but didn’t get the gig at that time. After performing some songs with the Ron Keel Band, Ron Keel brought the Steeler band members up on stage and they performed the ballad “Serenade” before Keel took the stage followed by Steeler‘s official set.

Thank you to Rik Fox for providing the Steeler set and how and when the band played the ballad “Serenade” during KeelFest.