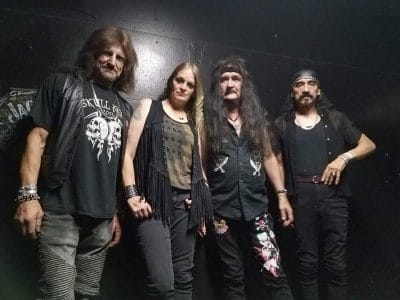 “On April 25th, legendary LA rockers Angeles joined Thor at Whisky A Go Go. Now the band has unleashed a video footage of their show, watch it below. The show was also a debut performance for Gwendolyn Casella, as Angeles‘ new singer!…

“We are so excited to announce that Gwendolyn Casella is the new singer of Angeles! Gwendolyn is already well-known on the Californian stages and our paths have crossed several times, playing the same stages in these past years. When we started looking for a new singer, Gwendolyn was a natural choice for us, she’s a real rock’n’roll chick with the right attitude!”

Just previously, Angeles announced the first round of Fall tour dates, see the confirmed shows below:

On April 12th, Dark Star Records released worldwide the new Angeles’ “Special Edition” album “Time of Truth” on CD, and you can only get it as an Exclusive Release from Dark World Entertainment and Dark Star Records / Sony.”