Latvia based glam rockers Bloody Heels have announced that their song “No Matter” which they performed on the radio show Dod Piece will be on their new upcoming studio album. 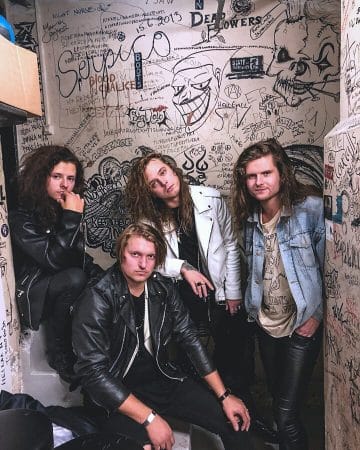 “It’s never too late to do a charity ! ❤️ Last night 4 A.M. we did a small interview and a couple of songs at radio Pieci ! #DodPieci
It’s not a secret anymore, this song will be on our next album (a little bit heavier version)? ! Hope you enjoy this as much as we did not sleeping yesterday ! ??

P.S. See you all tonight at Latvijas 1.Rokkafejnīca ! Last gig this year ! ?

Sleaze Roxx stated the following in its review of Bloody Heels‘ last studio album Through Mystery:

“Through Mystery sounds like early ’90s rock that glam morphed to. It wasn’t the ’80s but was still heavily ’80s influenced during a time where big riffs and strong melodies still ruled until grunge and the music industry wrecked it for us.

This album moves away from a complete bluesy element of hard rock and adds an influence of AOR with Vicky White‘s throaty David Coverdale-esque vocals but enough crunch that it could be played at a strip club — hence this review appearing on Sleaze Roxx. It’s also a bit of a departure from their sophomore EP effort Summer Nights as you can hear the maturation of the songwriting.”