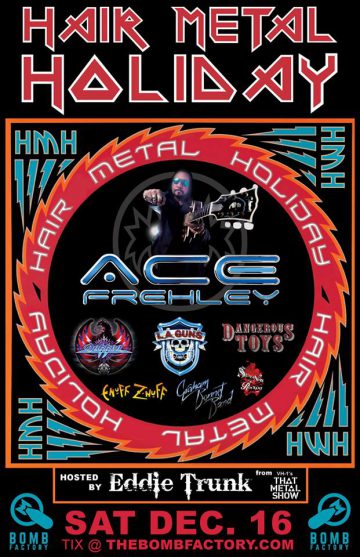 The Bomb Factory in Dallas, Texas, USA held the Hair Metal Holiday on December 16, 2017 which consisted of headliner Ace Frehley (former KISS guitarist) along with Dokken, L.A. Guns, Dangerous Toys, Enuff Z’Nuff, the Graham Bonnet Band and Super Nova Remnant, and which was hosted by the one and only Eddie Trunk.

Wikipedia states the following in part about Dangerous Toys: “Dangerous Toys is an Austin, Texas-based rock band with often humorous lyrics. Founded in 1987, Dangerous Toys released four full-length albums and one live album before unofficially disbanding at the turn of the millennium. Their major label debut, Dangerous Toys, was released in May 1989, and featured the singles “Teas’n, Pleas’n” and “Scared”. The album was certified as a Gold Record by RIAA in 1994. In 2006, “Teas’n, Pleas’n” was covered by Shadows Fall on their compilation album Fallout from the War, featuring guest vocals from Toys‘ vocalist Jason McMaster. Although Dangerous Toys continue to perform live to this day, the band has not released any new material since 1995.”