Canadian hard rockers, Dextress, have released video footage of their entire set of their performance at SAIT’s Gateway in Calgary, Alberta, Canada on January 16, 2016. The footage is available on the group’s YouTube page. 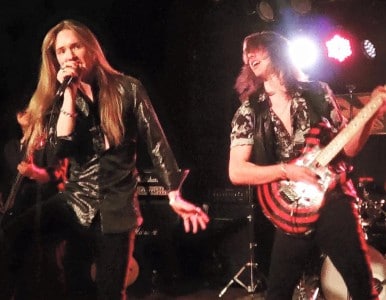 Dextress released a four-song EP entitled The Demo back on August 9, 2014. Sleaze Roxx stated the following in its review of The Demo: “The songs on The Demo are simple in that they are catchy and riff based, yet sophisticated by offering many different tempos and don’t seem to follow traditional song structures. I can’t say enough about the four songs on the EP, I just wish there were more of them to listen to. It is hard to pick my favorite track but I will go with “Red Eye Remedy” due to the infectious and melodic (yet basic) guitar riff around which the song is built on, the vocal harmonies — I want more of that — and the absolutely scorching guitar solo towards the end.”

Speaking exclusively to Sleaze Roxx, Dextress‘ guitarist Mark Janz provided details about the group’s gig at the Gateway: “The gig was for Landmark Events showcase. They do shows all over Canada featuring local talent, and exposing them to industry professionals and a diversity of music lovers. We got an astounding reception that night, so it just goes to show high energy performance is infectious.”

Dextress performing live at SAIT’s Gateway. Preliminary round of Calgary’s LME Showcase on January 16th, 2016. Huge thank you to everyone there that night fo…

In regard to releasing new material in the future, Janz stated: “We just re-recorded our song “Wild Is The Night” that was on our EP The Demo, but other than that we don’t have any immediate release plans. But we’ll see what 2016 has in store, cause you never know!” With respect to Dextress‘ other plans for 2016, Janz advised: “We’re hoping 2016 will bring us out of our stomping grounds in Calgary and give us the chance to play some shows around Alberta and beyond. We have some festival plans for the summer, so keep up with our official Facebook page or our website. We’re also going to be spending lots of this year promoting our latest single ‘Bring On The Girls.'”