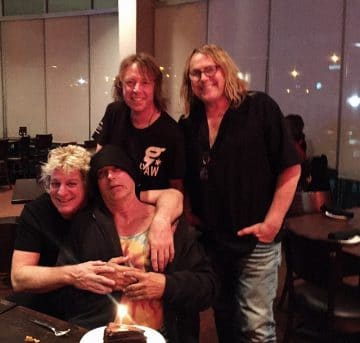 The foursome is scheduled to play their first live show together in about 19 years tomorrow at Ron Keel‘s Badlands, Pawn, Gold & Jewellery in Sioux Falls, South Dakota, USA.

The classic line-up Dokken members were recently interviewed by Crash & Taylor on the radio station KBAD 94.5 in Sioux Falls, South Dakota, USA and asked whether the media took it too far with respect to the animosity between guitarist George Lynch and singer Don Dokken. Brown replied as follows: “Well you know, they had to come up with some story and that’s the one they picked. So you know, they’re going to kick it off with that. We didn’t have any big gimmicks with our… We weren’t Mötley Crüe with the devil thing you know and fire and all so they went with that.”

Dokken‘s classic line-up playing “Will The Sun Rise” at rehearsal: