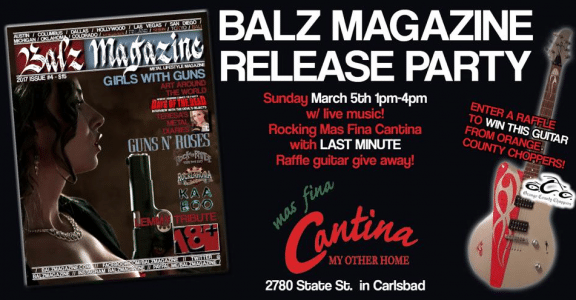 has now posted a YouTube video of drummer Bobby Blotzer, former Quiet Riot singer Seann Nicols and three unidentified people playing Ratt‘s hit single “Round And Round” at the Balz Magazine Release Party at the Cantina in Carlsbad, California on March 5, 2017.

This adds fuel to Metal Sludge‘s earlier report that Nicols will be joining Blotzer‘s version of Ratt in time for that band’s gig at the Prairie Knights Casino & Resort in Fort Yates, North Dakota, USA on March 18, 2017.

Back on February 15, 2017, singer Josh Alan advised via Facebook that he had resigned from Blotzer‘s version of Ratt back on January 23, 2017.

A week later, Blotzer announced that he would be continuing with his version of Ratt with the band’s next scheduled gig on March 18, 2017.

Video footage of Bobby Blotzer, Seann Nicols and others playing Ratt‘s “Round And Round” on March 5, 2017:

Vocalist Seann Nicols, rumored to be the new vocalist of Bobby Blotzer’s version of RATT, jammed with Blotzer at Mas Cantina in Carlsbad, CA on 3/5/17.