By now, Sleaze Roxx readers should be familiar with the departure of singer Tony Leone from 21st Century Goliath. Leone and 21st Century Goliath founding member Scott Roby had different recollections of whether Leone was fired or quit the band after a scuffle between the two while the group was in the midst of a tour of the US back in November 2015. 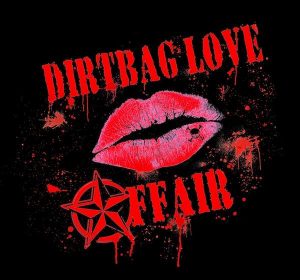 Leone first kept publicly silent about what happened before revealing his recollection of the events in an exclusive interview with Sleaze Roxx in late February and early March 2016.

At that time, Leone also spoke about reuniting with his former bandmates in Dirtbag Love Affair: “We never stopped being friends for one thing. It’s probably no secret to a lot of people that know me from Goliath that if you get into my rock n’ roll taste, it’s… I also like real old school punk rock n’ roll, street rock n’ roll… And I had gone to London [England] to see Michael Monroe and Hardcore Superstar, and just fell back in love with the performance, the songwriting… I am a huge fan of both of those bands anyways. But I was going “Oh my God.” This is sort of Dirtbag Love Affair CD cover the arena that Dirtbag was in. Maybe a little more punk rock but that’s what Michael Monroe is too. I just called Devin when I got back and I said, “Man, let’s give this another shot.” We had written a great album called ‘Good Riddance’ ’cause we broke up. I mean it was calculated and I just said, “What are we doing? We’re still friends. We have two albums of material. We still like to write music. We don’t have to stress out about the business. We’ll just write music, perform songs that we know and just try to do it again.”

Below is recently posted video footage of Leone singing in the reunited Dirtbag Love Affair band.