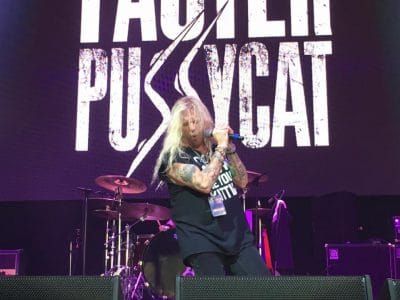 As mentioned earlier today, Faster Pussycat elected to play at the M3 Rock Festival without long-time frontman Taime Downe who is sidelined with pneumonia. The sleaze rockers ended up using a series of guest singers including Dangerous Toys and Broken Teeth frontman Jason McMaster (on “You’re So Vain”), Vixen singer Share Ross (on “House Of Pain”) and Danger Danger and Tokyo Motor Fist lead vocalist Ted Poley (on “Bathroom Wall”).

Yesterday, Faster Pussycat had announced that they were cancelling their gig that night at the Cattivo in Pittsburgh, Pennsylvania, USA on account of Downe being hospitalized with a severe case of bronchitis.

However, the group indicated in another Facebook post yesterday that they had no intention of cancelling their M3 Rock Festival appearance:

“We have no intention of cancelling M3, unless it takes a turn for the worse. Hoping his current stay at the hospital will allow him to recover enough by tomorrow to perform, Just FYI. –Ace“

Faster Pussycat with Share Ross on lead vocals playing “House Of Pain” at the M3 Rock Festival on April 28, 2017: