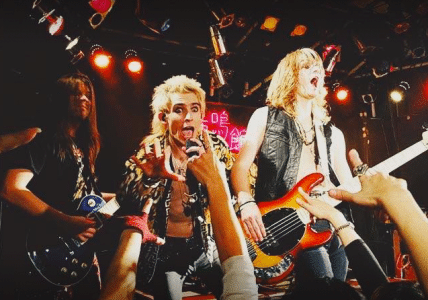 Sleaze Roxx stated the following in its review of KAATO‘s debut self-titled album:

“To be honest, I ran across KAATO by accident. Their new single “High Time” popped up on my YouTube feed, so I gave it a shot. Even before the song was over, I was contacting Lowney for more information about the band. As he told me, he’s “been dying to release this for months”, and I can see why. Sitting on it was doing no one a favour! There is much to explore on this album. There are elements of blues, funk, and sleaze, all mashed up into one great mix.

Tracks like “SDRnR” (“Sex, Drugs, and Rock & Roll”) or “Time Stands Still” have a bit of the southern rock twang like the Black Crowes had, or more recently Devil City Angels. Whereas “It’s All Happening Now” or “I Don’t Love You” are darker and heavier. Strains of early Def Leppard in fact. I’m generally not a fan of ballads, but I can hear significant emotion coming through in the vocals and guitar playing on “Like a Blade.” It reminds me of how Aerosmith used to do it.”