KISS made history once again performing for great white sharks in Australia and without frontman Paul Stanley for only the third time in their history.

The KISS concert for Great White Sharks and eight luck fans was organized by Air BnB and hosted by Adventure Bay Charters in Lincoln, Australia on November 18, 2019.

Thank you KISS and Air BnB for including us in this once in a lifetime concert that our team and guests will never forget. 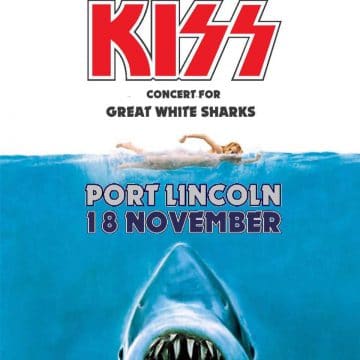 KISS were performing without Stanley as the group had previously cancelled its Australia tour dates from November 19, 2019 to December 3, 2019 due to the frontman battling a bad case of influenza.

There had only been two prior occasions when KISS performed without Stanley. The first time occurred on July 7, 2007 at a concert in San Jacinto, California, USA when Stanley was unable to perform on that night due to his heart spontaneously jumping to 190 plus beats per minute where it apparently stayed for over an hour. Stanley was told that he would be putting himself at risk if he performed that night so Gene Simmons, Tommy Thayer and Eric Singer performed as KISS without him for the first time. The second time occurred on April 15, 2016 at the 23rd Annual Race to Erase MS Gala held at The Beverly Hilton Hotel on April 15, 2016 in Beverly Hills, California, USA. Stanley was absent that time due to his recent surgery to repair a torn bicep tendon.