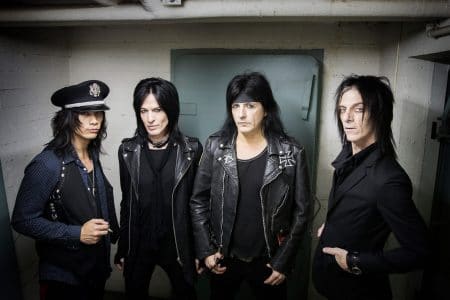 L.A. Guns frontman Phil Lewis shocked the hard rock world with his announcement that he was leaving the band before it was clarified that he was leaving one version of L.A. Guns (featuring drummer Steve Riley, bassist Kenny Kweens and guitarist Michael Grant) for another version (featuring guitarists Tracii Guns and Grant, bassist Johnny Martin and Shane Fitzgibbon).

Of note, Lewis announced that his departure from the L.A. Guns version that includes long-time drummer and bandmate Steve Riley would be effective January 1, 2017. Accordingly, the L.A. Guns‘ line-up of Lewis, Riley, Grant and Kweens are to their credit honouring their remaining gigs together as video footage has surfaced on YouTube (see below) of the foursome’s performance in Spokane, Washington, USA on December 3, 2016.

The current line-up of L.A. Guns has two more shows scheduled together on December 30, 2016 at Count’s Vamp’d Rock Bar Grill in Las Vegas, Nevada, USA and December 31, 2016 at the infamous Whisky A Go Go in Hollywood, California, USA.