A few days ago on July 14th, Mach22 had the privilege of opening for the one and only Guns N’ Roses at the Lincoln Financial Field in Philadelphia, Pennsylvania, USA. 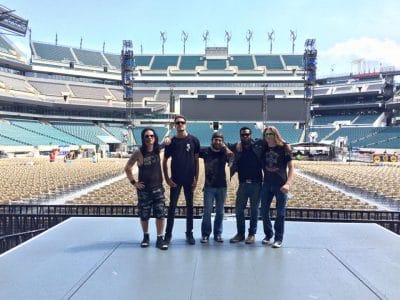 According to Wikipedia, the Lincoln Financial Field has a capacity of 69,176 people.

For the occasion, Mach22 reunited with their bassist Jaron Gulino who played on their two albums Sweet Intervention and Like My Chances. Mach22’s line-up for the July 14th show consisted of singer Lamont Caldwell, guitarist Sebastian Labar, drummer Damian Montecarlo, Gulino and guitarist Ric Haas.

Mach22‘s drummer Damian Montecarlo posted the following on his Facebook account two days prior to the show: “Just wanted to thank everyone who voted for us, shared the posts, made videos and showed their support to get us here. We could not have done it without your help. This has been the most amazing week so far…just seeing all the love really got me choked up many times this week. What an unbelievable feeling. Never would have thought that we’d ever open for Guns. I discovered them when I was 10 years old and they totally changed my life. Steven Adler has always been my drum hero and I learned how to play by listening to Appetite for Destruction, (which I borrowed from a girl in the neighborhood, who’s dad was a huge Biker but that’s another story lol). Anyway, we will make you guys proud and we will rip up that stage like we’ve never done before. Hope to see everyone there! Nightrain for all! Below is my reaction when I found out we won :)”

Mach22‘s EP Like My Chances was ranked the #1 album on Sleaze Roxx’s Top Ten Albums of 2015. Sleaze Roxx stated the following in that regard: “Mach22 have proven that playing great rock n’ roll does not have to be complicated. Mixing classic guitar riffs from the son of Cinderella‘s Jeff LaBar (Sebastian LaBar), a strong rhythm section, the soulful vocals of Living Colour‘s Corey Glover reincarnated Lamont Caldwell and a willingness to take a few risks on certain songs like Van Halen would do in their prime turns out to be a winning formula. Mach22 are definitely the beneficiaries of Sleaze Roxx opening up its albums of the year list to shorter EPs given that there are only six songs on Like My Chances. The sky’s the limit for Mach22.”