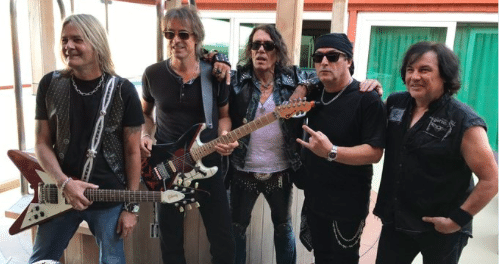 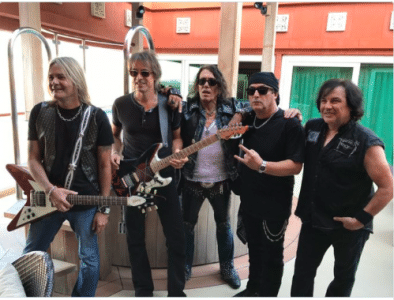 Video footage is now available of the first song played by the “surprise band” at the Monsters of Rock Cruise West on October 1, 2016. Rumours had been rampant that long-time Ratt bandmates singer Stephen Pearcy, guitarist Warren DeMartini and bassist Juan Croucier would be reuniting with guitarist Carlos Cavazo and a drummer other than Bobby Blotzer ever since Pearcy posted a photo of the foursome along with drummer Greg D’Angelo on Facebook on July 30, 2016.

Back on September 12, 2016, Y&T frontman Dave Meniketti advised Eddie Trunk that Y&T drummer Jimmy DeGrasso (who had filled in for Blotzer in Ratt in the past) was playing in a new band alongside Pearcy, DeMartini and Croucier. This band became a reality on October 1, 2016 when Pearcy, DeMartini, Croucier, Cavazo and DeGrasso debuted as the “surprise band” on the Monsters of Rock Cruise West. Many people consider this to be the “real” Ratt given that Blotzer‘s version of Ratt only includes himself as one of the classic line-up members of the legendary group and his version has undergone a lot of band personnel turnover in the span of one year. Only time will tell if Pearcy, DeMartini, Croucier, Cavazo and DeGrasso will be able to use the name Ratt in the future but with a line-up boasting three of the five classic line-up band members along with Cavazo who played on the group’s last studio album Infestation, there seems little doubt that the “real” Ratt band has finally emerged.