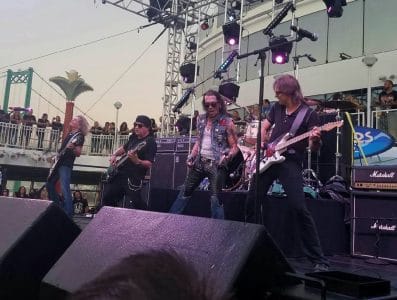 More video footage on YouTube (see below) is now available of the historic performance by singer Stephen Pearcy, guitarists Warren DeMartini and Carlos Cavazo, bassist Juan Croucier and drummer Jimmy DeGrasso as the five of them made their debut as the yet to be named “surprise band” on the Monsters Of Rock Cruise West also known as Monsterwood on October 1, 2016.

With three members of Ratt‘s classic line-up (Pearcy, DeMartini and Croucier) together again and DeMartini apparently owning 50% of the company WBS, Inc. that owns the name Ratt, one wonders how long that drummer Bobby Blotzer, who allegedly owns the other 50% of WBS, Inc., can keep going with the name Ratt and his version of the band, which includes singer Josh Alan, guitarists Stacey Blades and Mitch Perry, bassist Brad Lang and of course Blotzer.

The last time that Pearcy, DeMartini and Cavazo (along with Blotzer) teamed up on a record, they came up with the stellar Ratt album Infestation, which landed the #1 spot on the #2 slot on Sleaze Roxx’s Top Ten Albums of 2010 and Sleaze Roxx Readers’ Top 20 Albums of 2010. Sleaze Roxx stated the following with respect to the latter: “Ratt‘s triumphant 2010 return Infestation completely annihilated the competition. Appearing on over 47% of all ballots cast, and accounting for 28% of the first place votes, Ratt got out to an early lead and never looked back. Some could argue that the rodent-rocker’s name recognition was the only reason they landed in first place, and that would be true if Infestation wasn’t such a great return to form. Unlike their 1999 reunion attempt, in 2010, Ratt recaptured the sleazy sound that made them multi-platinum sellers in the ’80s.”