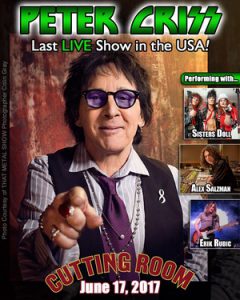 Former KISS drummer Peter Criss has apparently played his last ever concert, which took place at the Cutting Room in New York City, New York, USA yesterday evening (on June 17, 2017). Criss was backed by Australia’s Sisters Doll who also played with him during his second last show in Melbourne, Australia on May 12, 2017.

Peter Criss performs “Beth” at his final show ever at The Cutting Room on Saturday, June 17, 2017.