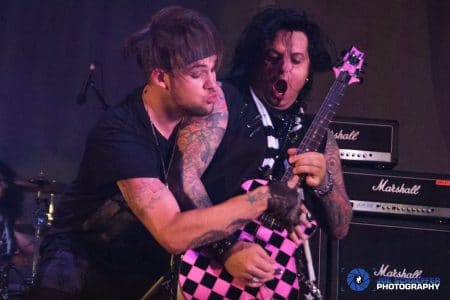 Sleaze Roxx stated the following in its review of Road Rage: “The positives of the album are a large number of well written songs with great musicianship by the great Frankie Banali who still bangs on that drum like it is 1983, Chuck Wright who plays bass incredibly well and deserves more credit, and Alex Grossi who is a diamond in the rough… Vocally, James Durbin delivers a performance like he should have on his original debut album, which felt put on and forced. Suits made that record, except for a few exceptions, and that is why it flopped with an audience that was ready to embrace it. On Road Rage, Durbin IS Durbin. And, that is all his fans ever wanted…

The negatives? Production! I mean, that is such a problem here. You have a band — on the same label — called Crazy Lixx who release a slick album that is as strongly produced and rivals the sound quality of Def Leppard. This sounds a lot more raw than that. Even albums like 1993’s Terrified, which may or may not have been released in the US at the time given the musical climate, had sharper production than Road Rage. There are some good songs on that album but Road Rage has much more rich content….

The elephant in the room is Kevin DuBrow not being on the album. He’s not on it due to a bad case of death. Why would the haters not want Frankie Banali behind the drums anymore just because Kevin died? I don’t understand that logic at all. Frankie continued with a singer that brings a youthful feeling to a veteran band. If he wanted a band that could sound just like classic Quiet Riot, he’d have found out who the hell sings for 5 Star Hooker and hired him because he sounds just like Kevin. Clearly, that is not what he was after. And, that should not be what Quiet Riot fans want either. Move forward… While loving the past… But, move forward.”