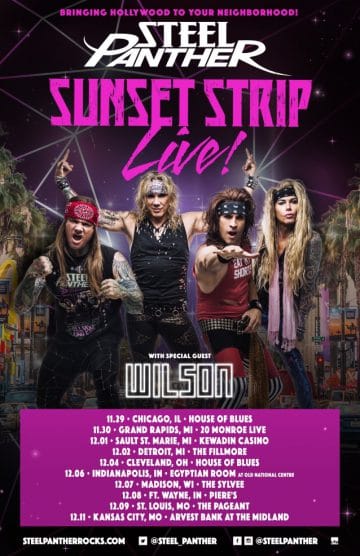 It’s been the four musketeers for Steel Panther for the longest time but the band recently made the decision to forge ahead without bassist Lexxi Foxx for the group’s latest run of North American shows for its Sunset Strip Live! Tour.

Joe Lester also known as Spyder is replacing Foxx while the latter is in “sex rehab.”

“California rock and party legends Steel Panther have survived a career of living  a decadent lifestyle surrounded by loud music, fast cars and beautiful women. That lifestyle of debauchery and proclivity towards random sexual encounters has finally caught up with the band’s bassist. Lexxi Foxx has voluntarily checked himself in to an undisclosed sex rehab. He will have to miss the current US tour that recently kicked off in Chicago. The band’s friend of over 30 years and backstage doorman Spyder will be filling in on bass for the upcoming tour dates.

“We love Lexxi Foxx…and his mother. We support his decision to enter sex rehab. We can’t wait for him to get back on the road with us after he learns how to have better sex,” added drummer Stix Zadinia on behalf of Steel Panther.”

Steel Panther performing cover of Bon Jovi‘s “Livin” On A Prayer” at House Of Blues in Chicago, Illinois, USA on November 29, 2018: