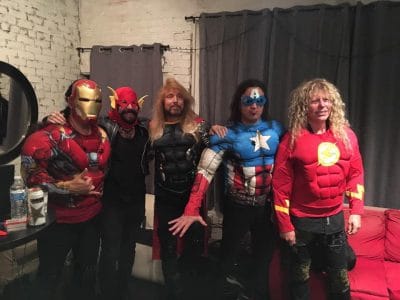 Getting in the spirit of Halloween, Stryper band members — frontman Michael Sweet, guitarist Oz Fox, drummer Robert Sweet and bassist Perry Richardson — dressed up as comic book characters from the Avengers for their October 31st gig at the legendary Whisky A Go-Go in West Hollywood, California, USA. The group was also joined by a very special guest and none other than L.A. Guns founder and guitarist Tracii Guns for at least one song — a cover of Van Halen‘s classic “Ain’t Talkin’ About Love.”

The following message was posted on Stryper‘s Facebook page yesterday: “Last night at Whisky A Go-Go. We had a few friends join us and we played the show as the Avengers. Oh, and we performed Take It To The Cross for the first time on stage! What a great night!”

In a recent interview with Sleaze Roxx, Stryper frontman Michael Sweet was asked if “Take It To The Cross” would be making it into the band’s setlist at anytime soon to which the singer replied: “Yeah! [laughs] We’ve been rehearsing that one. Our hopes are to add it to the setlist. We just haven’t’ done it yet. That’s a cool tune. We just wanted to do something a little different. We wanted to showcase a little ‘thrashier’ side of Stryper. Who knows? Maybe on the next album, we’ll do something like that or maybe even a little heavier?”

Stryper performing “Take It To The Cross” at the Whisky A Go-Go in West Hollywood, California, USA on October 31, 2018:

Take It To The Cross Live

Stryper performing Take It To The Cross -Super Hero Style at the Whisky a Go Go 2018. first live performance of this song!