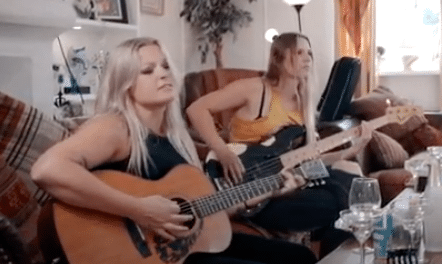 Swedish rockers Thundermother consisting of guitarist and band founder Filippa Nässil, lead vocalist Guernica Mancini, drummer Emlee Johansson (on guitar)and bassist Majsan Lindberg, have released a video for their acoustic performance for Radio Bob!’s Hand For A Hand Festival. The video was directed by Ted Lindén. The Thundermother ladies played four songs consisting of “Driving In Style”, “Whatever”, “Fire In The Rain” and “Thunderous.” 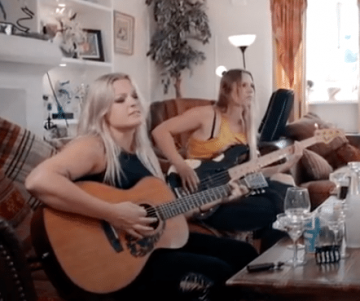 Thundermother are about to release their fourth studio album titled Heat Wave via AFM Records on July 31, 2020. The group previously released the albums Rock ‘N’ Roll Disaster (2014), Road Fever (2015) and Thundermother (2018) with the last one finishing at #6 on the Sleaze Roxx’s Top Ten Albums of 2018. Only Nässil has played on all of Thundermother‘s records with Mancini and Johansson joining the band prior to the third album and Lindberg being on board for the upcoming fourth record.

In a soon to be published interview with Sleaze Roxx, it was noted to Mancini that it really felt like Thundermother‘s current line-up was the “real one” to which she replied:

“I couldn’t agree more. I feel like most bands go through changes and it’s really, really tough to find people that want the same things that you want. People can say that they want it. I’ve been in bands before so I’ve gone through basically very similar things that Filippa has gone through with the changes, the changes of heart and bla bla bla. I think that it’s just part of being a musician. Now, we finally got to the point where we are four people with exactly the same ambition. We’re equally ambitious. We want the same things. We work really hard for it you know? We’re not going to stop until we accomplish what we set out to accomplish so it’s very exciting to be part of a band like that where we just work really well together and we have fun doing it.”