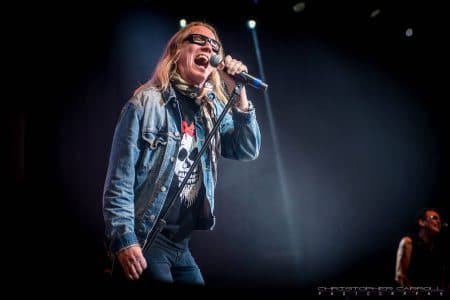 History was made yesterday evening (on November 15, 2022) as Dangerous Toys and Dirty Looks frontman, and possibly the now world’s premiere temporary fill in lead vocalist, Jason McMaster, stepped in seemingly at the last minute once again to save the day this time handling the lead vocals for Armored Saint at the latter’s gig at Rams Head Live! in Baltimore, Maryland, USA.

During the last month, McMaster filled in for none other than Accept frontman Mark Tornillo for a number of shows while the latter recovered from a viral infection. By seemingly all accounts, McMaster fared very well and so much so that Armored Saint called on his services to temporarily replace an ailing John Bush.

It appears that Armored Saint somewhat tailored their setlist with McMaster in the line-up as “Madhouse” doesn’t seem to have been previously included in the band’s setlist for its prior shows opening for W.A.S.P. during the last couple of weeks. This makes sense given that McMaster was likely more familiar with Armored Saint‘s older “classic” material rather than their new songs and he would have had very little time to familiarize himself with their songs in advance of their Baltimore set.