Bang Tango have started off the new year in high gear playing a couple of shows with one gig at the Slidebar Cafe in Fullerton, California, USA on January 2, 2016. Video footage of Bang Tango‘s set on that night is available for viewing below. 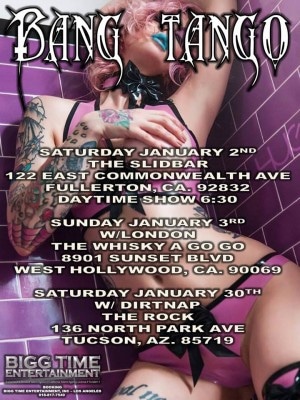 Back on October 27, 2015, Sleaze Roxx interviewed Bang Tango‘s frontman and leader Joe Lesté who stated the following about the band’s plans for the future: “Well, what we have been doing right now is doing some writing here and there. We’ve been coming up with some really good stuff. Now, it is just a matter of getting the guys together and record. What we are going to do is record a few singles and do a video for it, and then follow it up with an album. Just to get something out there for people to realize that we are here and we got a lot of shows coming up and stuff like that. I think that is the first thing that Bang Tango is going to do. We were writing on the road even and it was awesome so we’re looking forward to it.”

Bang Tango guitarist Rowan Robertson (who also plays in DC4) was interviewed by Sleaze Roxx on October 13, 2015, and after advising that new albums were in the cards for both Bang Tango and DC4, stated “DC4 are aiming to make a new record before spring. The musical direction is much the same; riff based melodic rock, hard hitting classic metal. Jeff has most of an album written now so we aim to do a full length record. Bang Tango are not as far along yet with our writing process being as yet limited to jamming ideas in hotel rooms on tour, but in the near future I plan to go to Arizona so we can get our heads together and move forward with a record. Joe has told me he is looking to do something a bit more in the realms of The Rolling Stones. We plan on it being a full length record.”

Bang Tango have a gig scheduled at The Rock in Tucson, Arizona, USA for January 30, 2016.