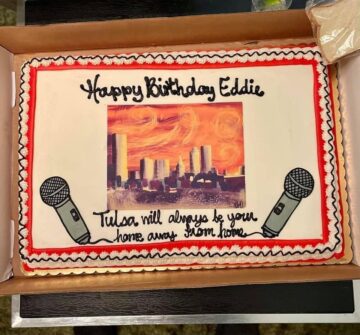 Bach and company had a little surprise for Trunk as after showing a massive birthday cake and having the crowd sing “Happy Birthday” to the latter, the ex-Skid Row singer ended up plowing the cake into Trunk pushing him into the ground. Trunk was a good sport about it and addressed the crowd afterwards while joking that he might need to see a chiropractor.

In an interview with Ruben Mosqueda for Sleaze Roxx back in May 2016, Trunk was asked about a negative concert review in Atlanta involving his friend Sebastian Bach to which he indicated:

“I heard a little bit about that. Not that much to tell you the truth. Baz is a very emotional guy; I’m not surprised that he got caught up in that. These guys are human. So tune that all out and let it roll off their back and others react and shoot back! I do that myself at times. I go through my Twitter feed and 99.9% of them are good people who say constructive and positive things or 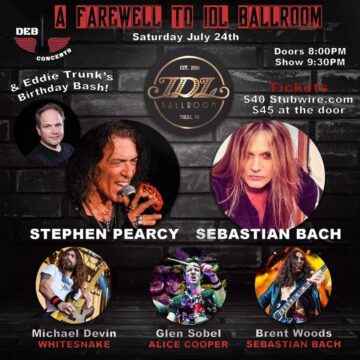 at the very least in a nice way. Listen, it just takes one person to say something really absurd that rubs you the wrong way and you respond. That’s what they are looking for. We’ve all done it. We’ve all been there. This isn’t the first time, nor will it be the last time that Sebastian will go down that road.

In the case of Sebastian for the most part, he really does sing fairly well. I don’t know maybe the guy had a bad night. Again, I don’t have a problem firing back. Just don’t do it all the time otherwise people will bait you.”

Video of Sebastian Bach plowing Eddie Trunk to the ground with birthday cake at IDL Ballroom in Tulsa, Oklahoma, USA on July 24, 2021 (video by Kenneth Richmond):

Video of Sebastian Bach plowing Eddie Trunk to the ground with birthday cake at IDL Ballroom in Tulsa, Oklahoma, USA on July 24, 2021 (video by Kevin Graham):

Stephen Pearcy and special guests performing “Round And Round” at IDL Ballroom in Tulsa, Oklahoma, USA on July 24, 2021 (video by Kevin Graham):