Video of The Black Marbles rehearsing song “Best Believe It”

Swedish rockers, The Black Marbles, have released a video of their new song “Best Believe It” which they recently performed at a rehearsal. The Black Marbles are scheduled to release their sophomore album in 2016. 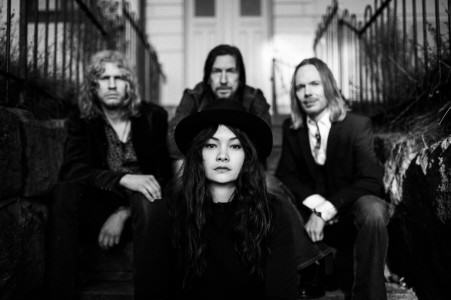 Sleaze Roxx reviewed The Black Marbles‘ debut album Made In Concrete, which was released in 2013 and stated: “The headline on The Black Marbles‘ Facebook page claims they are ‘classic rock with groove, energy, heart & soul’, and fortunately for me it’s every bit true. This is my first exposure this unique Swedish band and noticing that they list their influences as Bad Company, Free, Humble Pie, Faces, and the Rolling Stones, it’s easy to see where these guys get their motivation on these songs from.” Sleaze Roxx concluded: “I can’t get enough of a few of the tracks on this album and my hope for the band is that they reach as many people as possible. Play these songs live and people will refer to The Black Marbles as their next favorite band from the ’70s. “Don’t Fade Away” could easily fit onto side one of Led Zeppelin III and I swear I hear Aerosmith‘s Joe Perry on “The Stealer”. These guys must’ve had a huge record collection growing up, now if they would just release a covers album and show up the original performers. They would for sure say, ‘who the heck are these kids, they’re better than we are!’ Buy this album ASAP.”