It turns out that there may have been some truth to the “rumours” back in April 2017 that Mötley Crüe were apparently working on a “top secret” new album and planning a tour to follow for sometime at the end of 2018 since after photos surfaced of bassist Nikki Sixx and drummer Tommy Lee in the studio together with producer Bob Rock at the end of last month, the group’s singer Vince Neil has announced via Twitter today that the group is indeed working on four new songs.

About four hours ago, the following message was posted on Neil‘s Twitter account: “Exciting news! I’ll be going back in recording studio in a few weeks with the boys to record 4 brand new Motley Crue tracks! Rock On!!” A further message was posted about an hour ago on Neil‘s Twitter account clarifying: “For those of you who don’t understand, yes “the boys” means Motley and we signed a contract not to tour anymore. We never broke up or said we would never make music again. Hope this clears it up.” 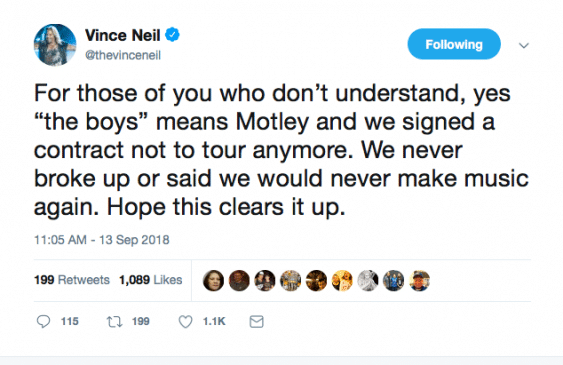