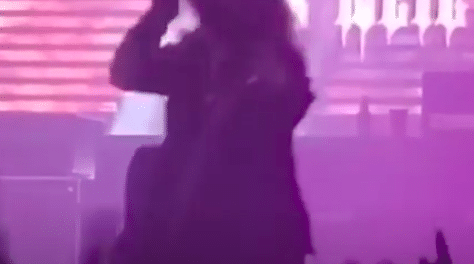 Mötley Crüe frontman Vince Neil seems to have done quite well in getting healthier and fitter during the last few months but he experienced a setback yesterday evening (on October 15, 2021) when he suddenly and unexpectedly fell off the stage while he and his solo band performed the song “Don’t Go Away Mad (Just Go Away)” at the Monsters On The Mountain Festival, which was held at the LeConte Center in Pigeon Forge, Tennessee, USA. While Neil was rushed to a hospital, the rest of his solo band consisting of bassist Dana Strum, guitarist Jeff Blando and drummer Zoltan Chaney played what appeared to be 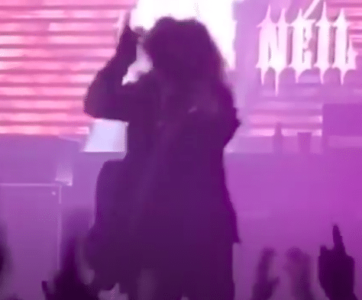 an improvised setlist for the rest of their set.

After Neil‘s solo band finished their rendition of the Black Sabbath classic “Heaven And Hell” (see 7:22 mark of last video), Strum addressed the crowd stating (as transcribed by Sleaze Roxx): “How you doing tonight? What a great fucking festival right? Alright, so I don’t want to be the asshole that is the bearer of bad news but I’m going to tell the truth. The truth is Vince fell and broke ribs when he fell. He can’t breathe and he’s going to be dealt with medically. Now that sucks for us and him. He was so excited to be here. He lives in Tennessee but he was willing to stick it out [laughing a bit], tough it out with the very people here telling him, ‘Don’t do it.’ Let’s have one good round of applause for this guy who was tough enough that feels there’s no fucking tomorrow. OK, we’re going to do one thing as a tribute and everyone of you fucker sing so he hears it when he gets taking out. Are you ready? Here we go.” And on that note, Strum, Chaney and Blando launched into the Mötley Crüe classic “Live Wire” with Blando handling the lead vocals. Just before the song ended, Strum addressed the crowd again stating, “Let him hear you before he goes out to a hospital. This shit happens in real life and it just did. Let me hear you.”

Vince Neil falling off the stage while performing at the Monsters On The Mountain Festival in Pigeon Forge, Tennessee, USA on October 15, 2021 (video from Chris Brodzik‘s YouTube page):

Vince Neil solo band performing “Heaven And Hell”, “Live Wire”, “We Will Rock You” and “Poundcake” at the Monsters On The Mountain Festival in Pigeon Forge, Tennessee, USA on October 15, 2021 (video from Taylor Burgess‘ YouTube page):