Mötley Crüe frontman Vince Neil is now getting sued with respect to an altercation that happened back on April 7, 2016. He is also reportedly scheduled to appear in court today with respect to a misdemeanour battery charge against him. 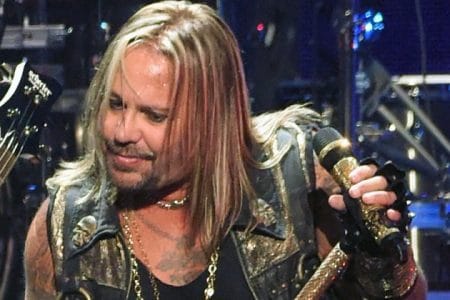 “A single mother has filed suit against Mötley Crüe frontman Vince Neil for attacking her in front of a Las Vegas hotel back in April. According to the lawsuit, Neil‘s attack resulted in “substantial medical expenses, lost wages, pain and suffering, and emotional distress.” She is seeking $75,000 in damages.

The lawsuit, filed yesterday in federal court, states that Kelly Guerrero, a registered nurse who lives in California, and her 14-year-old son were in Las Vegas for spring break. As they were leaving the Aria Hotel, they spotted three celebrities: Neil, comedian Carrot Top, and Nicholas Cage (her son’s favorite actor, according to the suit).

Guerrero said Neil and Cage were engaging in “horseplay”—Cage had put Neil in a headlock—as she attempted to catch Cage‘s attention.”My son loved you in Ghost Rider and City of Angels,” she called out to him as the group passed by.

“Then,” the suit contends, “as Mr. Cage let go of Vince Neil and was walking away, Vince Neil attacked Kelly without warning or provocation. Neil grabbed Kelly‘s hair from behind, yanking her down to the pavement on her back.”

Cage came to the plaintiff’s rescue by grabbing Neil in a headlock and shouting at him to “stop this shit now.” When the actor released him, Neil allegedly assaulted another woman, who ran out the hotel entrance.

According to the lawsuit, Neil was “severely intoxicated and/or under the influence of powerful drug(s).” He was charged with battery by the Las Vegas Metropolitan Police but not arrested.

The following day, Guerrero woke up with pain in her neck, lower back and buttocks. She was seen in the Desert Springs Hospital Emergency Room and diagnosed with a “back sprain or strain; neck sprain or strain and sacral contusion due to physical assault.” Later, when she returned home to Santa Cruz, her primary care physician diagnosed her with a “fractured coccyx and a severe left hip injury.”…

Neil is scheduled to appear in Las Vegas Justice Court for the misdemeanor battery charge July 27.”

You can read the entire article at Broadly.