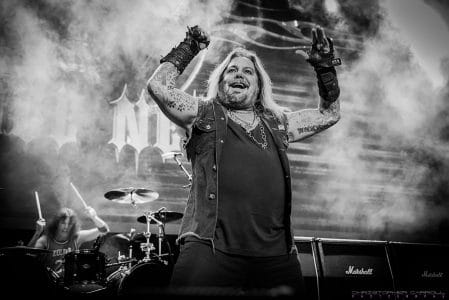 After the recent article from Radar Online suggesting tension between Mötley Crüe frontman Vince Neil and drummer Tommy Lee over conditions from a reported $150 million tour offer from Live Nation, Neil took to Twitter to dispel any suggestions that there was a riff between him and Lee.

“People these rumors are false. I haven’t spoken to any band member’s since movie premiere. I had to cancel shows due to back problems which I am getting treatment now. There is no tension between me and Tommy. Don’t believe anything from These so-called gossip sites. Keep Rocking”

Presumably, Neil is referring to the premiere of the Netflix movie The Dirt, which was released back on March 22, 2019 and which saw the Mötley Crüe band members — Neil, Lee, bassist Nikki Sixx and guitarist Mick Mars — together again to promote the film.

Of note, Neil did not comment specifically on the alleged $150 million tour offer from Live Nation to Mötley Crüe. 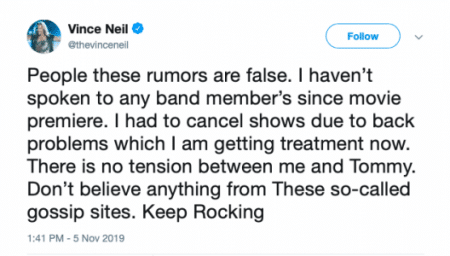