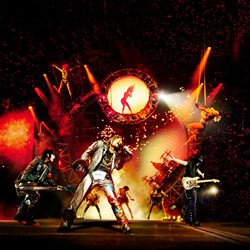 Earlier in the year Motley Crue bassist Nikki Sixx revealed that the notorious band’s days were numbered, and now frontman Vince Neil confirms that the group will will put out a new album in 2014 and then say goodbye.

“We’re going to put out some new music next year and then it’s our farewell tour — we’ll do the world one more time and then call it a day,” Neil told QMI Agency. “Our farewell tour (will be like) 2014 or ’15. Tours last about two years. So to finish the world, you’ve got to do the U.S., Canada, Europe, Asia… it takes some time.”

As for the reason behind the Motley Crue split after forming in Los Angeles in 1981 and subsequently selling 80 million albums, Neil says: “It’s time, that’s really it. Do you want to go out on top rather than fading away? And that’s it. You know, I’ll continue to sing Motley with my solo band and put out solo records and stuff and (bassist) Nikki Sixx’s got his radio show and (drummer) Tommy Lee wants to be a deejay, and so we’ll see what happens.”

Guitarist Mick Mars has long suffered from a chronic, inflammatory form of arthritis that mainly affects his spine and pelvis.

Neil, who has several businesses, says he also has plans to expand those. About a year ago, he opened a Las Vegas strip club called Girls, Girls, Girls, after the Motley Crue song.

“It’s doing great,” he says. “I have a lot of plans to take some of these ideas and put them in other cities and stuff. Expanding my alcohol lines of (tequila), I’ve got some rums now. There’s a lot of things happening that I’m cultivating. That’s fun stuff. But music’s always No. 1. I’ll always be on stage somewhere.”