The previews before the premiere of the first episode of The New Celebrity Apprentice television show on NBC on January 2, 2017 was centered around Culture Club‘s flamboyant frontman Boy George (a recovering alcoholic) not appreciating Mötley Crüe singer Vince Neil drinking alcohol while the two were in a recording studio together. 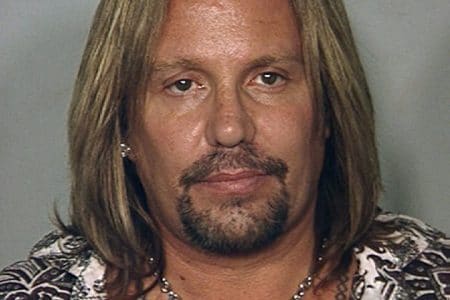 has reported that MMA legend Chael Sonnen has advised that the two singers actually almost came to blows but The New Celebrity Apprentice crew broke them up before things escalated.

The following was reported by TMZ yesterday:

“The Boy George vs. Vince Neil war on ‘Celebrity Apprentice‘ was VERY REAL and almost came to blows on set … so says Chael Sonnen…

“Those guys had real-life heat,” Sonnen said … “They had a real life confrontation. It was a fight. It was verbal but it was escalating very quickly.”

Sonnen told us it appeared the two were about to get in a fist fight … and that’s when production rushed in and shut everything down to break it up.

“Production thought it was too hot for TV. They came in, turned their microphones off and shut the cameras down.”