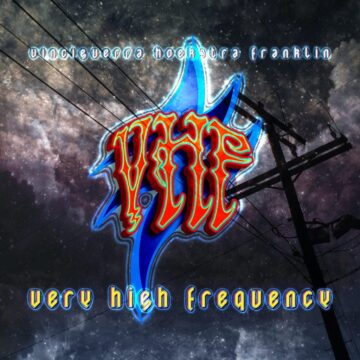 Track List for Very High Frequency:
01. Shattered Insomnia
02. Whispers of The Soul
03. Suspended Animation
04. Conception To Death
05. Invisible Thread
06. Backside of Your Eyes
07. All Is Within

In an interview with Guitar World back in June 2014, Hoekstra explained how VHF came about as he stated (with slight edits):

“I’ve known Todd since the two of us were roommates in Hollywood back in the nineties. He recently hit me up and told me he had some drum tracks Tony Franklin had played on and wanted to know if I’d be interested in playing on it as well. He sent them over to me and basically said to do whatever I wanted on it. The cool thing about it was that we built the song from the drums up, which is a pretty backwards songwriting concept. But the results that came from it were really unique. We ended up with a hybrid mix of cool playing along with some really trippy stuff. For instrumental music, it focuses more on the vibe of the song instead of just the chops.

That first song went so well that I asked Todd about doing an EP. We ended up doing five more songs like that. Then Todd and Tony did a bass and drum song called “All Is Within” and I did a conceptual guitar piece (“Conception To Death”) where I improvised on a track and then wrote seven more to it. It’s basically all of the stages of life condensed within a minute and a half. Everyone can check out the video for the song “Whispers of The Soul” online right now. It’s a very cool, unique project and we’re happy to have it out there.”