Photo by Ryan Witting from Rockin' You All Night

Vinnie Moore recalls how he got the guitarist gig in UFO

UFO guitarist Vinnie Moore was interviewed last month by Ryan Witting on the Rockin’ You All Night podcast. The interview covered a wide range of topics including the guitarist’s new solo album Soul Shifter, his deceased UFO bandmate Paul Raymond, his desire to record with Carlos Santana, UFO‘s Last Orders: 50th Anniversary Tour and how he got the guitarist gig in UFO. 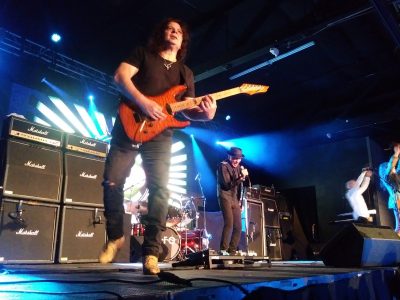 Photo by Ryan Witting from Rockin’ You All Night

The following is an excerpt from the interview with Vinnie Moore by Ryan Witting of Rockin’ You All Night podcast along with Witting‘s additional comments:

“Since the summer of 2003, Vinnie Moore has been the lead guitarist of UFO, making him the longest tenured lead guitarist in the band’s 50+ year history. In regards to his long tenure with one of rock music’s most iconic bands, Moore told Witting, “It’s kind of a surreal thing. Every once in a while, I have to pinch myself, to be honest.” Moore stated that he was a fan of UFO since he was a teenager. “I had the Force It record, Lights Out, Obsession, Strangers In The Night. I jammed with that stuff. I took some of the stuff into my teacher, so he could figure it out and show it to me. I was definitely a big fan. I never would have ever dreamed that I would someday be in the band, let alone even meet them.” Moore elaborated the surreal feeling about being UFO‘s longest tenured guitarist by telling Witting, “Even in the beginning, when I got the gig, I thought, O.K. this may be a good thing for 3 or 5 years, at the most. I never thought that it would last as long as it has.”

Witting asked Moore to explain the series of events that led him to joining UFO. Moore remembered, “I heard that they were initially looking for someone in England, and that didn’t work out. So, they expanded their search to Europe, and then that didn’t work out. Someone recommended me. Their manager used to manage Michael Schenker. I did a tour with Michael Schenker in 1999. The manager, his name was Peter, he was there on the tour. So, I knew him. He thought, ‘Hey, Vinnie might be the right fit. You should check him out.’ Also, another guy (Jerry Carillo) recommended me too. He had done sound for UFO. So, a couple people mentioned my name. At a certain point, they asked me to send some of my music to Phil (Mogg). So, I put together kind of a compilation of various tunes. It was like 11 songs. I thought, ‘I’ll probably never hear anything,’ but it’s a good thing to do. You’ve got to take a shot. Then, I heard back, like 10 days later, that Phil really liked it and wants me to join the band.” Moore explained the initial plans for his role in UFO. Moore told Witting, “There were no live shows at that point. The plan was to do a new record. So, immediately, we talked on the phone and started discussing writing songs for the new record (2004’s You Are Here). So, I just fed him some ideas. Jason Bonham was joining the band at the same time. It was a lot of fun going into that.”

You can listen to the entire interview with Vinnie Moore at Rockin’ You All Night‘s Soundcloud page, YouTube page or below:

In this episode of Rockin’ You All Night, future Rock & Roll Hall of Fame guitarist Vinnie Moore is interviewed at The Pressroom in Phoenix, AZ by Ryan Witti…