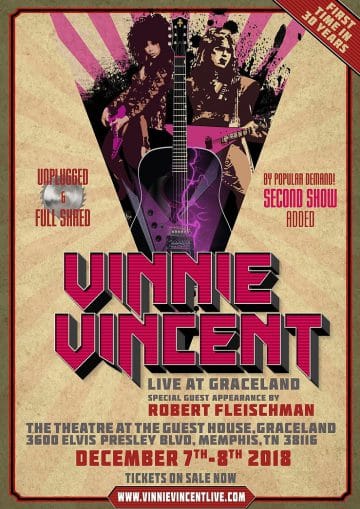 Former KISS guitarist Vinnie Vincent has now added a second show on December 8, 2018 in addition to his previously announced “one night only” show that will take place at The Guest House at Graceland located at 3600 Elvis Presley Boulevard in Memphis, Tennessee, USA on December 7, 2018.

The Vinnie Vincent Live website has been updated too and provides further information in its “FAQ” (Frequently Asked Questions) section.

In terms of whether Vincent will be playing guitar and singing, the website states: “Yes, Vinnie will be performing the first half of the show acoustically, the second half full shred with his iconic VV electric guitar. He’ll do a combination of songs he wrote for KISS and the Invasion, and maybe a few surprises. The shows run from 7:00pm to 8:30pm on Friday, December 7, 2018 and Saturday, December 8, 2018.”

Vincent previously announced that he was adding a “full shred” in addition to his acoustic show, for which the website states: “Yes! Vinnie heard the fans loud and clear that they wanted to see him shred on all of the great songs they know and love, and so he decided to give the fans what they wanted, along with a killer acoustic set featuring Robert Fleischman to start the show.”

It’s not known at this time what the “full shred” portion of the shows will consist of and whether a singer will be utilized for that. With respect to a reunion with Vincent, Fleischman previously stated at the end of January 2018 (as transcribed by Hard Rock Hub):

“Possibly. It depends when it’s going to be. If it’s like an unplugged thing, like KISS did or Nirvana, I wouldn’t mind doing that.”

“I know a lot of people would want the whole electric version and all that stuff and – you know – you really have to put it together for something like that because once you go that route, everyone’s critical coat comes on.”

“That’s not my decision, it’s Vinnie’s. Cellos during ‘Boyz Are Gonna Rock’ … something cool…everyone’s older now…”

“I can’t run as fast as I could then, I don’t fit in the same pants. To expect me to just go up there and wail, I just don’t see myself doing that. I could do some songs but (others) I probably couldn’t do because I’m an old guy now.”