Sixteen days after Sleaze Roxx reported that former KISS lead guitarist Vinnie Vincent was planning a private birthday bash with select fans in Nashville, Tennessee, USA, the elusive guitarist has announced that he plans on throwing a “Birthday Bash” in Nashville on August 10, 2019. 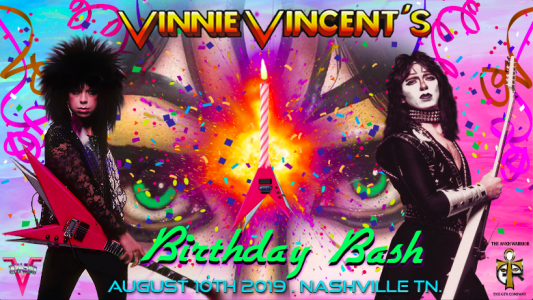 Vincent had released a statement about his possible Birthday Bash in a Facebook group back in June 2019, which stated in part:

“If we meet the numbers to balance out the Birthday event related expenditures, it’s a go. At that point, I am planning some surprises. And it will be a blast.

It’s important for me to publicly enjoy this ride with the fans whether it’s playing, recording or reconnecting with the fans, but it’s getting more difficult at every turn find that enjoyment based on the above, so the truth is that my appearances may be ending.

I’m happy to play, write and record in private, if need be, so it works out one way or the other for me.

If my history, recordings and legacy is all i leave behind because of this cesspool, so be it. I’m fine with that too.

So if you want it, grab it now, as this will not be an ongoing event. If you make this happen, and want to hear a no holds barred, gloves off interview, and more, this will be the first of its kind and the last interview I plan on giving.

There will be no filming or recording. No one outside the attendees will have any entitlement to witness this event online other than you.”

Vincent has a recent history of cancelling his own events. The guitarist’s comeback shows with drummer Carmine Appice, bassist Tony Franklin and singer Jim Crean in Nashville, Tennessee, USA scheduled for February 8 and 9, 2019 were cancelled less than two weeks before. His Speedball Jamm performance scheduled for June 7, 2019 was also cancelled as the event stopped being advertised on his website in or about mid-May 2019.