During the second day of Vinnie Vincent‘s Merry Metal Christmas event held at the S.I.R. Studios in Nashville, Tennessee, USA on December 14 and 15, 2019, the former KISS guitarist gave an interview adorned in his KISS era Ankh Warrior make-up to Mike Brunn. 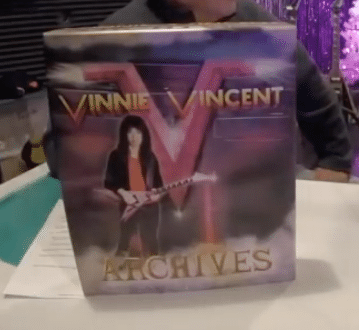 In terms of his unreleased material, Vincent stated (as transcribed by Sleaze Roxx): “I’ve got my Vinnie Vincent Archives box that has yet to see commercial release. I’m working on it. It’s my masterpiece in the making. But I thought that I would bring those to this point here.”

With respect to the plans for his unreleased material, Vincent advised: “We’re creating extra books to go with this you know. Really high quality picture books with you know, history, the Vinnie history, where it all began through here, through there. That’s going to be part of this box set. I’m planning — it’s quite an expensive project — let me bring this over here. This is a very expensive project. It all began way back when, way back going back to prehistoric times. This was supposed to be six cassette tapes [laughs] of home demos and unfortunately, I got detoured for 25 years. So I am picking the pieces up. It’s just that way you know? It’s been a long time trying to now find daylight. So here we are. Everything is good. You know. Good for me.

Trying to finish this and it’s going to be turning into a multi, multi, multi-CD project. It could reach 15 to 20 CDs because of the amount of material but it’s also going to be released on vinyl so with a picture book that goes along with it of course. Like I said, it’s very expensive. This is what the time delay is. So, but, as long as I am still here above ground, this thing is going to get out. And when, I cannot say because of the expense involved but it’s going to come out, because this is actually my legacy. It covers everything from the time that I was a kid — from when I’m 13, 14, the first songs I ever wrote — and, to my first band, my first recording of my band [which] my Dad you know paid for in 1966 [laughs]. Yeah. That was amazing.” Vincent continued: “Up through all the KISS demos, up through the writing sessions, up through all of Vinnie Vincent Invasion demos, recordings, outtakes. It’s a fun, fun journey you know. It has the Guitarmageddon unreleased tracks, all of master quality. The thing I love most about the KISS era on this is that it has the very first songs that I wrote with Gene [Simmons] and with Paul [Stanley] which I’m really — those are moments for me. I can… It’s all so visual. It’s an instant recall you know. But they were magic moments and that’s all captured. Jam sessions we had. Eric [Carr], Gene and I — we’d do something like this you know. Just at rehearsal. S.I.R. all the time in New York. So we’d just jam it out you know. Hours you know, and then we’d lead in to rehearsing a song. So it gives a peak into this really private stuff that you don’t get a chance to hear. So it’s my legacy. I’m really proud of what I want to out into this.”

When asked whether he had any unreleased songs from the Creatures of The Night album, Vincent stated, “It’s a great album,” before adding: “There’s lot of unreleased stuff that I have. There’s unreleased songs that we wrote, just wrote that never even got recorded that are on there. Like I said, we were talking yesterday from the early, the early demos or the early songwriting versions of maybe “Unholy” and “I Just Wanna” and stuff that went on Revenge that we never released, which I always through we should release. But they’re there. It’s some really fun stuff.”

Interview with Vinnie Vincent on Rock and Roll Experience with Mike Brunn on December 15, 2019:

Here is my exclusive interview with Vinnie Vincent, IN MAKEUP!! This was filmed at his Very Merry Christmas Party on Sunday, December 15th 2019.