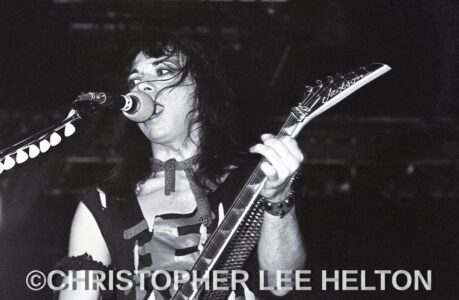 Will former KISS guitarist Vinnie Vincent finally release a new album? All signs seem to point that way as the guitarist held a private listening party of his reportedly completed album at Blackbird Studios in Nashville, Tennessee, USA on March 12, 2022 for a few select people including organizers of the upcoming Creatures Fest.

The inaugural edition of Creatures Fest will be taking place in Nashville, Tennessee, USA from May 27 to 29, 2022 and will feature former KISS alumni Vinnie Vincent, Ace Frehley, Peter Criss and Bruce Kulick along with Vixen, Quiet Riot, Enuff Z’Nuff, John Corabi and Pretty Boy Floyd.

The following message was posted on Rosie Luck‘s Facebook page on March 13, 2022:

“Welp, yesterday was a day I would have never imagined in my life. #VinnieVincent has not only been working with us on Creatures Fest, but has been working closely with Neil, Brian and Dale to record a new record. Last night we got to listen to the completed album (and even blew a speaker) at Blackbird Studios in Nashville for a private listening party. 15 year old me would never believe one day I’d be in a limo with V, eating sushi while watching him be interviewed, or in a control room while he is beaming with joy over his work. The album is complete and off to press. What a truly amazing experience. Just a few cell phone shots for now. More pics to come.”

“At the Vinnie Vincent Invasion album listening party. This new album is incredible!!! Press is going crazy over this. Can’t wait for everyone to hear it.”

“New Vinnie Vincent Invasion album is so good!!! We are listening to it now!!!”