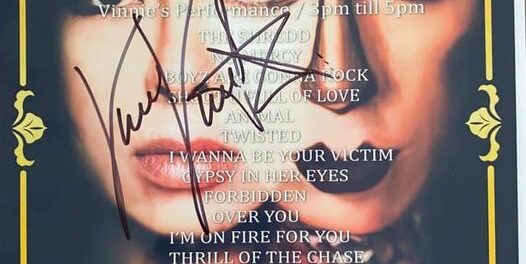 Former KISS guitarist Vinnie Vincent played a two-hour live set to backing tracks at his May Metal Madness event at the S.I.R. Soundstage in Nashville, Tennessee, USA on May 29, 2021. 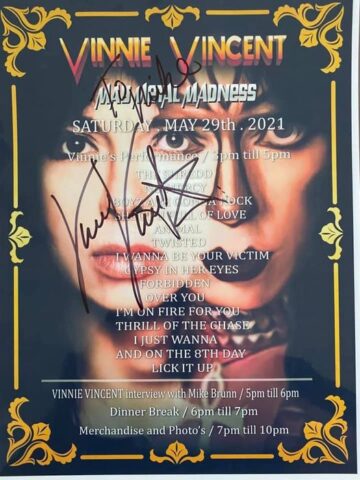 The following message was posted on The Rock Experience with Mike Brunn‘s Facebook page on June 2, 2021:

“I’ve had so many people asking me about Vinnie Vincent’s performance this past weekend. The requests for info have come via PMs, Facebook pages, or KISS fan sites that it’s actually a bit overwhelming at times. If you are interested in knowing what he performed this weekend, check out the attached photo. That’s the handout Vinnie gave to all his guests and it has the full setlist on it.

Vinnie played complete versions of the songs listed in the photo to newly recorded backing tracks. In fact some, but not all, of the songs were slightly extended to add an extra solo section to the end. “The Shredd” that started the show lasted about 30 minutes and is exactly what it sounds like. Basically, a 30 minute “shredd solo“. My favorite part of the performance however was what Vinnie called the “power ballad” section, with my personal highlight being the All Systems Go outtake “Thrill Of The Chase”. I’d never heard this song before and as I mentioned to Vinnie in my interview it sounded killer! Think of the Vinnie songs “Ecstasy” or “That Time Of Year”. It was in that style and I hope Vinnie does officially release this song one day. I’d love to hear it again. The version of Gypsy In Her Eyes he played was also different than the versions I’ve heard before. I think I like the “leaked” versions better, but this is a great song regardless. Forbidden was excellent as well. I’ve always been a big fan of Vinnie’s melodic songs, so this section of songs were cool to me. Don’t get me wrong, seeing and hearing him shredd is cool, but the melodic stuff is what made me a fan.

It was also extremely interesting hearing Vinnie play I Just Wanna and hearing what type of solo he would have put on that song if he was in KISS in 1992. While I think I like Bruce’s solo better, it was fascinating hearing Vinnie’s take on it. A very cool moment in the performance for sure!

Let me also add it was LOUD. Very loud. To me Vinnie’s guitar seemed a little out of tune on the last song or two, but that could have just been me and my ears. But, I’m just being honest. Oh also, did I mention it was LOUD?!?

The full performance basically lasted two hours. He told brief stories in between the songs, but they were brief and may not have been before every song. It’s hard to fully remember. He also had in attendance Richard Friedman who came up on the stage to talk for a few moments about them being friends as kids and writing Back On The Streets together. That was a really cool moment. If I had one complaint about the performance it was that Vinnie didn’t perform Back On The Streets after sharing that story. Oh well.

Overall, the performance aspect was much longer than last time I saw him. Like I said, the entire performance was nearly two hours, give or take a few minutes, and it was throughly enjoyable.

As always, there was no video allowed during the performance. It’s too bad, as these performances will be lost in time forever, but that’s how Vinnie does things. Unusual, yes. But it’s his shows, his rules.

For some reason people always seem to be fascinated with what food was served at these events. I honestly didn’t walk over to the food table once all day but various people I chatted with that day told me they ate sandwiches, shrimp, sushi, and salad. I jokingly called it the “S” meal.

People also like to ask me about the attendance at these events. I estimated 50-60 people there. Someone else posted yesterday that the event was capped at 40 to allow for social distancing. I have no idea what is right, I didn’t count heads and I have no correspondence with Vinnie’s team about the event (beyond them asking if I wanted to do a podcast episode once I told them I was attending). All I know is the turn out seemed strong.

Last, if you missed it, yesterday I posted my interview with Vinnie from Saturday at the party. You can check it out here: