Former KISS guitarist Vinnie Vincent is reportedly planning a private event for select fans to celebrate his birthday but has warned that his appearances may be ending.

Vincent‘s Speedball Jamm performance scheduled for June 7, 2019 was also cancelled as the event stopped being advertised on Vincent‘s website in or about mid-May 2019.

The following message from Vincent was reportedly recently posted in a Vinnie Vincent related Facebook group frequented by Vincent and it was reposted by Decibel Geek principal Chris Czynszak in a comment on a Facebook thread earlier today: To all VINNIE VINCENT fans.

This is my statement straight and from the heart.

When Steve came to me with the idea of celebrating my birthday with the fans, I loved the idea right off.

Euphoria and Legion have become a safe haven for true VINNIE VINCENT fans.

These sites were intended to protect the good fans from the relentless internet bullying mobs of hate-filled lunatics engaged in the systematic witch hunt to sabotage my brand name and reputation.

These VINNIE fans, who at one time may have had good intentions, sadly have become aggressive, violent, vengeful and hate-infected radicals due to the ingested bullshit they are constantly fed daily by these losers.

As a result, these “lost fans” have become malignant and malevolently obsessive with anything VINNIE VINCENT to the point where they’re desperation finds them at the doors of LEGION and EUPHORIA, spying and doing anything to get in to discover real news, stories, or information at any cost to feed their sickness which they twist out of context.

Some have even tried to trick unknowing members to disclose the private messaging between the inside club members.

So because of this derangement syndrome, I have reached out to my fans on a private invite basis to share in this special event of my birthday.

At this point, I’m not certain if this fight against this collective insanity is worth any more effort. So the decision is up to you, the true fans.

If we meet the numbers to balance out the Birthday event related expenditures, it’s a go. At that point, I am planning some surprises. And it will be a blast.

It’s important for me to publicly enjoy this ride with the fans whether it’s playing, recording or reconnecting with the fans, but it’s getting more difficult at every turn find that enjoyment based on the above, so the truth is that my appearances may be ending.

I’m happy to play, write and record in private, if need be, so it works out one way or the other for me.

If my history, recordings and legacy is all i leave behind because of this cesspool, so be it. I’m fine with that too.

So if you want it, grab it now, as this will not be an ongoing event. If you make this happen, and want to hear a no holds barred, gloves off interview, and more, this will be the first of its kind and the last interview I plan on giving.

There will be no filming or recording. No one outside the attendees will have any entitlement to witness this event online other than you. 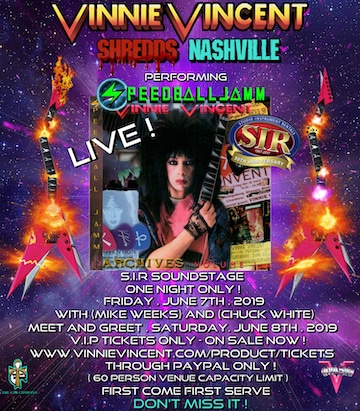 On a side note, my attorney sent me an email yesterday stating that an “organizer” of an event currently scheduled on the same day August 10, wanted to promote the VINNIE BIRTHDAY BASH in connection with “their event” without remuneration in using the name VINNIE VINCENT.

I said no. My attorney gave them other options which required payment guarantees. They declined and therefore, I declined anything further to do with these organizers and their events, whether present or future.

Bottom line, no one gets to use the name VINNIE VINCENT unless they substantially pay for that right. The free ride for these freeloaders is over.

So anything you hear online stating “Vinnie’s people reached out to them to promote the birthday bash” is a lie, which by educated guess was started by one of the organizers to make themselves look important.

I am working now to have new Vinnie merch at the event if everyone can get confirmed asap, along with music, Q&A, food, signings, photos and more.

Maybe some special friends will attend. And as long as all who are coming confirm with Steve, this is a go.

Moreover, stop believing these triggered topics and phrases such as “Vinnie doesn’t show up” “Vinnie can’t play” and “Vinnie rips off his fans.” These people need to grow the fuck up !

This is cleverly fabricated propaganda invented by the banished and rejected leeches, who got the boot, who, in desperation decided to slander the name of VINNIE VINCENT to bring importance and relevance to themselves.

I won’t let my name be used to bring instant celebrity or credibility to the undeserving any longer.

If you want to hear me play, you want proof, buy a ticket. That simple. Put your money where your big mouth is. You don’t get it for free whether by demand, threat, intimidation or challenge.

So, I will hopefully see my fans on August 10 at the Birthday party bash.

Where we go from there will be by special invite so if the BIRTHDAY BASH is a success, expect a private invitation to SPEEDBALLJAMM next.

To all the true fans, I send my love. Vinnie“